Whenever we see a picture of a cute baby, human or animal, we can’t help but think – this little creature is just too cute for words. Well, we’ll do our best to present the cutest African animal babies through words, particularly the ones that have something in common besides sharing the Dark Continent – they get to be quite big when they grow up, as well as very dangerous, yet equally beautiful. From the lovely flappy-ears stomper and the precious rhino to large cats and bovines, here’s a quick overview of some of the sweetest little ones of the wild. 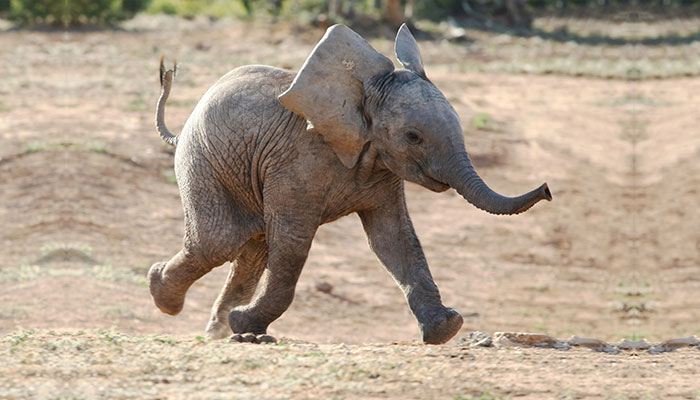 Spotting an elephant calf is a highlight of any safari. Seeing them on TV gives out an impression that elephant babies are small since we usually see them hopping around near their enormous mothers. However, a baby elephant weighs around 260 pounds/ 150 kilograms at birth! Due to being in the mommy’s stomach for an incredible 22-month period, they are very well developed when born. In fact, they can walk barely a few hours after being brought into this world. Calves stay under the watchful eye of their mothers for months, even years. They drink a lot of milk for the first couple of months – up to 3 gallons a day!

Did you know that elephant offspring has ginger fuzz after being born? Yes, baby elephants have either red or black hair on their heads. The amount of hair reduces over time and its primary function is to aid the cooling process of the body. It’s interesting to observe how baby elephants deal with the fact of having a trunk. Imagine being born with such a body part and not knowing exactly for what it’s for. It’s hilarious. In the wild, little ear-flappers can be seen waving them around and also often putting them in their mouth and sucking on them, just like a human baby would suck its thumb. It’s not until they are 6-8 months old do they start realising they can use their trunks for eating and drinking.

Elephants are very affectionate animals, and intelligent too. Mothers care about their infants and so does the rest of the herd. In case something happens to a mother elephant, the calf will be taken care of by another female member of the herd, a foster mom, or a surrogate mother if you will. If a young one is complaining about something, older members of the family will all come to soothe the upset calf. Female babies stay with the herd for the rest of their lives, while males will eventually leave to form their own herds at around 12-14 years of age. Great places to see elephants in Africa include South Africa's Addo Elephant Park, among others. 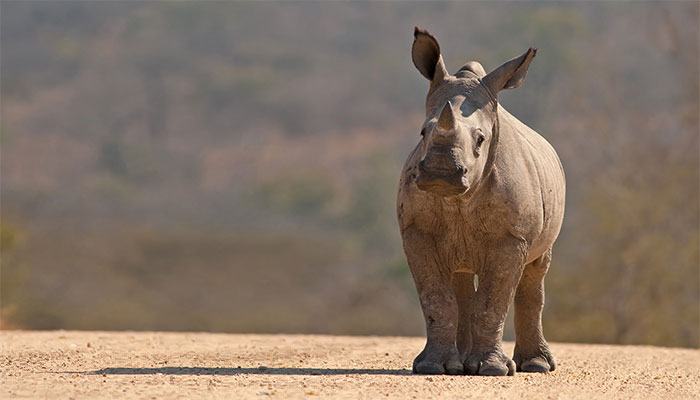 A rhino calf has become such a precious thing to behold, unfortunately because many species of rhinos are now endangered. Their name comes from two Greek words, rhino, meaning nose and ceros, meaning horn. A safari tourists’ delicacy, this giant herbivore has been hunted for decades for its horns. Used in folk medicine and believed to have healing properties, a rhino’s horn is also often sold as a trophy or decoration. Every two and a half to five years, a female rhino will bring a baby into this world, normally just one baby. The little one will be up and about within one hour, but will master its walking abilities fully in a few days.

After spending 18 months in its mother’s stomach, the rhino baby forms an immediate bond with her upon its birth. Born without a horn, rhino calves are usually born at 88 to 140 lbs (40 to 64 kg), so that’s still pretty big. In the following period, the baby will stay close to its mom at all times and mimic her. Rhinos have wrinkled skin without hair and a layer of body fat beneath to regulate temperature. For the same purposes, they will often soak in mud, using mud as a sunblock. Cool, huh? This also helps with getting rid of pesky insects.

Apart from looking adorable in the mud, baby rhinos also look adorable while running towards their mommies. They will instinctively do so in case of any danger, and the mother will always fight and do everything in her power to protect her child. Rhinos are extremely protective and can be aggressive when provoked. A young rhino will stay under its mother’s wing, figuratively speaking, until five to seven years, for females, and seven to ten years, for males. At this time, they are considered all grown up. 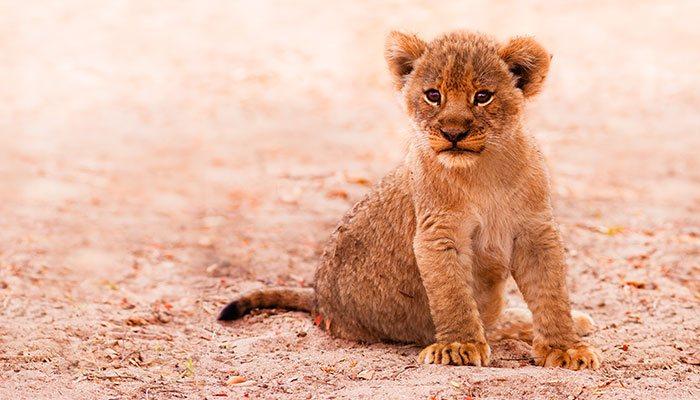 For many of you the first thing that comes to mind at the mention of a lion cub is that iconic scene in The Lion King when little Simba is presented to the kingdom before you think of an actual baby lion as seen in the wilderness. Hey, that’s okay, as real little lions are just as lovable and cute as the ones portrayed in cartoons. As adults they are fierce felines whose roar can be heard kilometres away, yet new-born lions are totally blind! Just like puppies or kittens, baby lions are born blind and will open their eyes at 8 days old. Fun fact – lion cubs have tawny black spots which eventually disappear as they grow older.

Litters are usually of 2 or 3 cubs, but mothers can give birth to up to 6 younglings at a time. The fuzzy little creatures, born approximately after 110 days in mommy’s stomach, spend the initial period of their lives away from the pride, as their mother leaves to a safe place to give birth. The younglings are then introduced to the pride at the age of 6 to 8 weeks. They are nursed for about 6 months, not only by their birth mothers, but also by other lactating lionesses in the pride. Dedicated moms will not show favouritism for their own offspring, but will care about other babies with equal effort.

Male lions don’t have a huge role as fathers to the lion cubs, if any at all. They will protect them from danger, but will not participate in providing food or training them to hunt. These two important aspects of the cubs’ development depend entirely on the female members of the pride. Most young lions achieve their hunting skills at 2 years old. Unfortunately, before that age they are very vulnerable and a large percentage of them die in the wild due to several reasons: predators such as hyenas, leopards, jackals and pythons, infanticide at take-overs (when an outsider lion usurps a pride) and starvation. 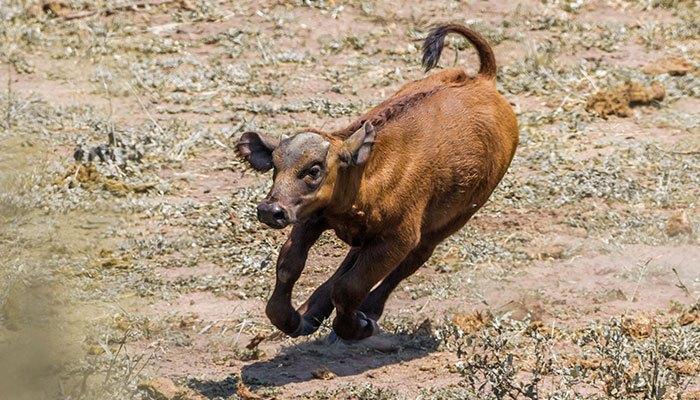 The African buffalo, which inhabits sub-Saharan parts of Africa, is, in fact, the only species of wild cattle that can be found in the African continent. This giant (bulls are 650 to 800 kg in mass) prefers open savannah areas with grass, loves grazing in the early morning and late afternoon and needs water daily. Cows usually give birth every two years, as they mate and give birth only during rainy seasons. The calf spends roughly 11 months in its mommy’s stomach. Since buffaloes live in herds which can be a few hundred strong, older calves are located in the centre of the heard for safety while new-borns remain hidden in vegetation for the first few weeks. Babies are occasionally nursed by their mothers and then they join the rest of the main herd together.

During a period of one year, the calf suckles and is completely dependent on its mother. They have a strong bond. In case of danger, buffalos won’t always run. Chances are they will group and form a circle around their younglings to protect them. Prayed on by lions, the buffalos will fight for their lives and the lives of their offspring, oftentimes coming out as the winners. However, if the herd goes into full stampede mode, some of the little ones may be left behind as they are not fast runners. All in all, the entire herd will act protective of its members, especially the young ones. If distress bleats of calves are heard, the herd will come to the rescue as quickly as possible.

Buffalo calves are rather playful; the little rascals will express their playfulness by running, prancing and head-butting their mothers. Young members of the herd have a brown coat, similar to the females. The part where their horns converge is called the boss, and male younglings usually have hair on their bosses. You can observe a large population of African buffalo in the Kruger National Park, as well as in Kwazulu Natal and Eastern Cape provinces. 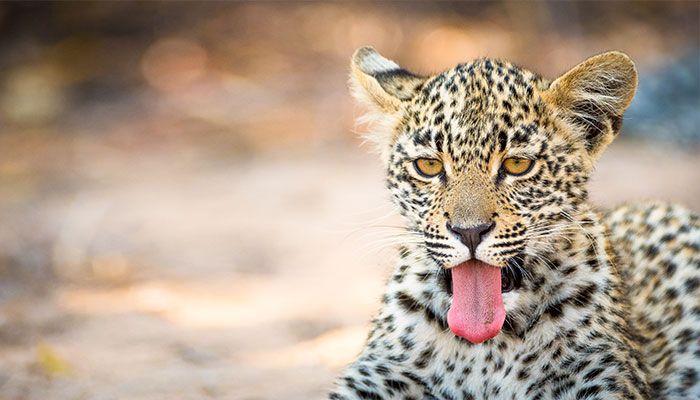 A leopard cub or a little fuzzy ball of bluish-grey fur? It’s hard to tell! Baby leopards are helpless as new-borns, completely blind and weigh just about half a pound – and they are dead cute. Cubs are born without any spots on their coat, which may come as another surprise, as we usually associate leopards with their golden, spotted furs and slick bodies made for hunting. Female leopards give birth to a litter of 2 or 3 cubs at a time. Their pregnancy lasts up to 100 days, and when they are ready to give birth they will find a safe place, a secluded den, to do it. With their eyes and ears shut, cubs use their strong sense of smell to stay close to their mother, and they will make soft squeaking sounds. At roughly 10 days old, the baby leopard will show spots on its fur and its eyes will open.

Moms are very protective of their cubs. They will have a number of dens set up through their territory, carrying their cubs from one to the other in order to keep predators off the trail while on the move in search for food. The young ones depend on a milk diet for about four months, after which they switch to a meat-only regime. Mothers teach their offspring not only to hunt and climb, but also to swim. At first, cubs will practice to hunt gracefully and in silence by stalking one another or attacking twigs, leaves or stones. As their skills develop, they will start hunting insects and small animals, but they won’t perfect the knowledge they need to survive until they are about 2 years old. At that point, they usually leave their mothers, establish their own territories and have their own offspring.

Leopards may be adorable when little, but they grow to be one of the top predators of the food chain!