Those who’ve had the chance to spin the reels of RTG slots before know that this hardworking developer often draws inspiration from stories found in Asian tradition, art or history, Most of the time, these slots look impressive and come with a set of various features aiming to reward the player in every possible aspect. Storm Lords is no exception! The 5-reel, 3-row slot machine is designed to support up to 50 win lines and features amazing graphics, setting the reels against a romantic Asian backdrop of a shrine on a snow-covered mountaintop, surrounded by cherry trees in bloom.

Storm Lords has two main characters, Nie Feng (Wind) and Bou Ging-wan (Cloud), boys accepted in a martial arts clan who eventually become prominent in the jianghu (martial artists' community). Also known as The Storm Riders, Wind and Cloud were first mentioned in the Hong Kong artist Ma Wing-shing's manhua series Fung Wan. The comics were adapted to two Hong Kong films and a Taiwanese television series. Now the characters will live another life in RTG’s upcoming online slot, one boasting a katana sword and the other wielding his big sword and wearing his silver hair long; seeing them in action rounds up the fantasy for any Asian comics fan. The slot players will only have the opportunity to see them on reels 2 and 4 where they appear as substitute symbols with the ability to ‘nudge’ and cover the entire reel. The game showcases three other characters, an older man who may be the prophet or the martial arts teacher, a young woman, possibly a lover to one of the main protagonists, and a boy who could represent one of them when they first started studying the atrial arts.

Have the Legendary Fighters Met Their Match?

All symbols pay left to right except scattered Amulets and scattered Treasure Coins, which pay in any position. When 6 or more Treasure Coins appear anywhere the Treasure Coin Feature is triggered, awarding 3 re-spins with Treasure Coins held in position until the spins are repeated without charge. If a new Treasure Coin symbol appears during the feature, it is held for the remainder of the feature and the number of remaining re-spins resets to the initial 3. The Free Games Feature is unlocked when 3 or more Scatter Amulets appear in the base game; once activated, the feature will give two choices to the bettor – Wilds Reels (6 free games are awarded, during which Wind and Cloud are held on reels 2 and 4) or Treasure Spins (6 free games are awarded, during which Treasure Coins are held in all positions on reel 5). 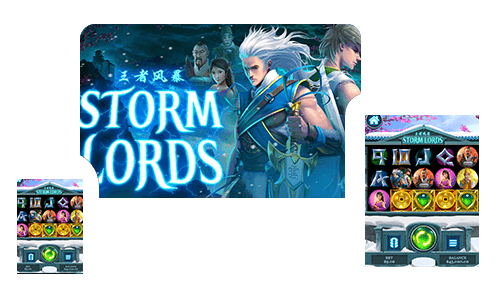 According to the stories, there were attempts to turn Wind and Cloud against each other. Instead, they persevered, kept their honour, overcame all the difficulties and restored peace. Storm Lords is an online slot that can be enjoyed on multiple levels. Apart from the visual satisfaction and the fun its gameplay brings, you can also look forward to a top prize of 50,000 times bet per line if you manage to fill all reel positions in Treasure Coins!