Get Ready for T-Rex 2 at Springbok Casino

Having seen the original T-Rex slot become a big success, Realtime Gaming started working on its sequel T-Rex 2 and will soon remind us how entertaining and rewarding it can be to play with long extinct creatures. Wild T-Rex has in meantime learnt a few new tricks and returns to up your chances of frequent and large wins. To make the prehistoric adventure even better, RTG is offering hundreds of free spin opportunities and not one but two progressive jackpots.

Find Dinosaur Eggs to Win Up to 100 Free Spins

Before we talk about T-Rex 2, let's do a quick recap of the original T-Rex slot. The first title pays over 25 flexible paylines, with Wild T-Rex showing up on the middle reel and doubling the prize, Scattered Eggs triggering a pick feature which prompts players to click and reveal up to 10 free games per Egg, and a randomly awarded progressive jackpot.

RTG's sequel to the hit T-Rex slot also features 5 reels and 25 variable paylines and will doubtlessly reunite us with a few old friends unlikely to come across in real life. Game symbols in T-Rex 2 will pay in the usual manner – regular ones left to right and Scattered Eggs either way.  T-Rex will come back as a grouped Wild willing to appear only on reel 1 and substitute for all other icons except the aforementioned Eggs. If it contributes to a winning combination, T-Rex will double the prize. This Wild hero may occasionally devour dinosaurs that land on other reels and replace Triceratops, Suchomimus or Raptor with its own clone.

Scattered Eggs are able to do a different kind of magic. Land 3, 4 or 5 simultaneously and you'll trigger 10, 20 or 100 free games. The T-Rex Terror Wild feature described above is active for as long as house pays for spins. And as if all that wasn't enough, RTG has also enabled free spin retriggering for additional win opportunities at zero cost. 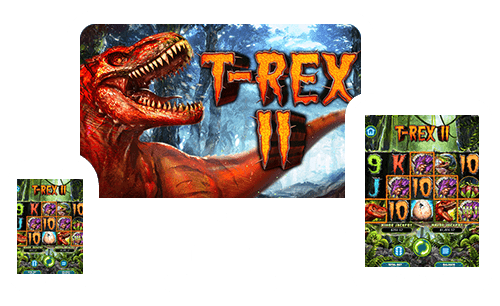 Massive Win Potential on Desktops and Smartphones with T-Rex 2

Like many of the other Realtime Gaming slots, T-Rex 2 features randomly triggered progressive jackpots with the potential to pay after any of your spins. When won, Minor and Major jackpots will reset to $250 and $1,000 respectively and then start growing once again to help Springbok players experience what may be their largest win ever.

T-Rex 2 is a highly volatile game so make sure to exercise smart balance management for a chance to score a maximum win of 5,000x bet per line. It makes no difference whether you play on a desktop computer, smartphone or tablet; graphics and animations will remain equally impressive and you'll get to benefit from identical special features offering numerous free-play opportunities and Wild wins. Visit Springbok on September 25 and check it out!