Hunt for Halloween Treasures at Springbok

Another exciting new title is about to arrive to Springbok just in time for Halloween. Paying over 243 ways, RTG’s Halloween Treasures video slot promises to deliver loads of fun as well as numerous win opportunities thanks to a double Wild act, free games with a boosted win potential and one of four progressive jackpots guaranteed to be won as soon as the Halloween Jackpot Feature is triggered. The hunt starts on 9 October, don’t be late!

No Tricks, Only Treats

Try to enter dimly lit alley without thinking of what may be lurking in the darkness. The 5-reel area leaning against a brick wall fills its positions with images of a vampire, spooky-looking pumpkin, candle, magic potion and witch’s hat. You’ll want as many of the same to appear simultaneously so that you can collect, with or without the help of a substitute symbol. Fortunately enough, Halloween Treasures slot has not one but two Wilds, the first depicted as Halloween House and the other as Gravestone. Halloween House will land on reels 2, 3 and 4 and, when needed, replace any of the other game symbols with the exception of Gravestone. The latter only shows up on reel 3 and can stand in for all except for Halloween House and Scatter. What’s more, Gravestone multiplies the payout up to 5 times.

Special feature is triggered when 3 or more Scattered Crystal Balls land left to right. That’s when you’ll win 12 free spins with low-value A, K, Q, J, 10 and 9 symbols eliminated from the play. Not only does this little change massively increase free games’ win potential but it’s also possible to retrigger the feature and keep winning on the house. Halloween House may trigger the Halloween Jackpot Feature offering yet another opportunity to score a sizeable payout. The player is presented with 12 magical coins and prompted to click to reveal a jackpot symbol. Matching three of the same symbols awards the corresponding jackpot - Mini, Minor, Major or Grand, the largest one resetting to $5,000 each time it’s won.

Win Up to 50,000x the Bet on Desktops and Mobile Devices 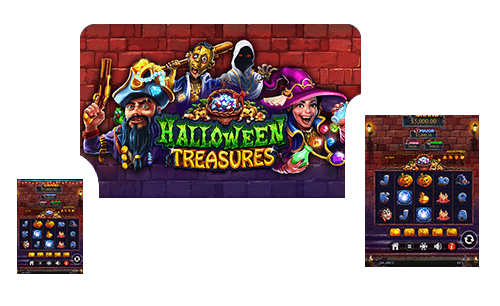 As always, Realtime Gaming makes sure you can play anytime and anywhere you like. The combination of double Wild magic, re-triggereable Free Spins free of low-paying symbols and a chance to win one of 4 progressive jackpots can surely prove to be more profitable than the traditional trick-or-treating. If you get lucky with the game’s numerous special features, you could be celebrating a win worth as much as 50,000x the base bet. There should be plenty of opportunities to score as this is a low variance game so one can look forward to a longer gameplay even on a limited budget.