Rudolph Awakens - Rudolph is Back in a New Adventure

The Christmas theme is something slot designers come back to very often. It is everyone’s favourite time of the year, a kind and family holiday which symbolizes harmony and happiness. Real Time Gaming takes this theme and puts it is a little dark humour situation in Rudolph Awakens with its Rudolph vs. Santa series of video slots where the spiteful reindeer and his loyal elves assistants go against Santa in a bit aggressive, but still funny way.

After games such as Rudolph's Revenge, Santa Strikes Back! and Return of the Rudolph comes Rudolph Awakens in which Rudolph is at it again, determined to beat Santa in a western-like showdown.

Christmas is Coming and it Will be Fun with Rudolph Awakens

As usual, Rudolph wields a baseball bat, while Santa packs a machine gun, and while the red-nosed reindeer has elves on his side, Santa is backed by young girls dressed as Mrs Santa. More symbols on the reels include penguins, icy presents and typical 9 to Ace playing cards symbols. The game works with a standard 5x3 configuration. The background switches between a nice snowy landscape and a battlefield with trenches and blown-up, smoking piles of who-knows-what. Luckily, the style of the design is cartoonish and humoristic so there’s nothing to shy away from. It’s all good fun!

There are 30 variable paying lines in the game, and the symbols pay left to right. You need at least three symbols to land a payout. The mischievous Rudolph is the most important symbol as it represents both the Wild and the feature trigger icon. In combination with the symbol Extra Games it awards valuable prizes, but also works “solo” and has a few tricks up its sleeve a player can easily benefit from.

Rudolph is Wild on reels 2, 3 and 4 and substitutes for all other symbols except the Extra Games icon. When it lands on reels 2 or 4 during base play, Rudolph will cover the entire reel. If this happens during free games, the rule also applies to the middle reel, and also Rudolph will nudge to increase the chance of winning. When the red-nosed outlaw covers reel 3 the Rudolph Awakens Feature is triggered. He is left frozen in ice and 10 free spins are awarded. If the Extra Games symbol appears on reels 1 and 5 during free spins, the player gets 3 more free rotations. This is the maximum number of added freebies and this can happen up to 3 times in one free spin round. 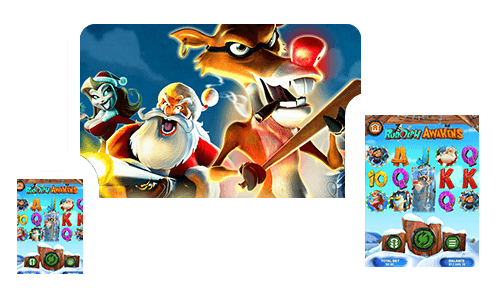 The Rudolph Wild melts and is woken up again when the free spins feature is over. He is then ready to strike again, with each new spin. If you’re ready to fight by his side, you may be lucky enough to score the game’s maximum win –a prize worth 50,000 times your bet per line. Rudolph Awakens is not a progressive jackpot slot game, but 50,000x the stake is quite a payout. There’s a bit of a baddie in each of us, so why wouldn’t you have fun with that and play for real money wins at Springbok casino, starting with November 27th. Ho-ho-ho, Rudolph runs the show!

Watch a first preview of Rudolph Awakens in our YouTube Channel.