After Magic Mushroom, RTG decided to abandon fantasy and the realm of enchanted woodlands and go straight to SF. Pulsar is the provider’s latest release and it invites you to venture into a cosmic quest to the unknown parts of the universe where you will get to discover treasure stars across an unusual honeycomb grid.

There is so much we don’t know about our own galaxy, let alone other galaxies out there, and even though humans have made so much progress in the field of space exploration we are yet to expand our knowledge and understanding of what surrounds us in the grand scheme of things. Through astronomy and space programs, we’ve gotten a little closer to the heavens above, and now RTG is bringing stellar reels onto your screen in Pulsar, a 5-reel online slot machine with an unconventional configuration which includes hexagonal cells much like a honeycomb would.

Instead of spinning the reels, on the push of the Play button you will fire out lasers and position symbols into the cells of the grid. Wins are won left to right across 20 fixed paying lines. One may think – okay, the gameplay is pretty standard. Yes, except that there are cascading wins involved! Cascading wins occur as a result of the removal of any symbols in winning combination. Pays are awarded and the symbols disappear, leaving room for new ones to take their place. This may cause new winning formations and the cycle repeats until there are no more wins to evaluate.

Each time a Neutron Star first appears, it is randomly assigned a number from 3 to 1 which will act as a countdown value. For each spin and for each cascading win, the number in the countdown will decrease by 1. When a Neutron Star countdown reaches zero, it will explode, destroying all symbols within its blast pattern. The vacant positions are then occupied by a randomly selected regular symbol. 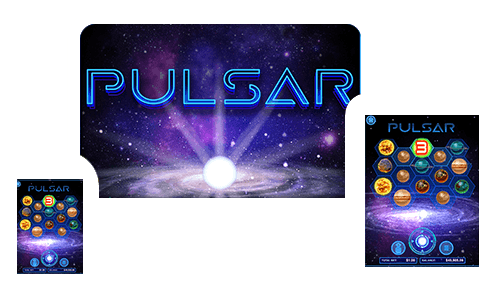 Are You Ready for Lift-Off?

Pulsar may lack Wilds symbols, Scatters, progressive jackpots and free games, but the game is packed with suspenseful moments and lots of intergalactic thrill. It is a demonstration of the creativeness of RTG developers who never fail to surprise us with their abilities to deliver immersive, rewarding slots such as Pulsar. The release date is set for January 22nd, so prepare your space shuttle for launch at Springbok’s platform!