Soccer Action in 2021 at Springbok

It’s the most popular game on Earth, followed by billions. It’s estimated that there are 3.5 billion soccer fans in the world! So, it’s no surprise that there are lots of soccer themed games out there. But Football Fortunes stands a little apart from the rest. Featuring loads of features, sharp graphics and an exciting soundtrack, you’re bound to become a fan.

Football Fortunes was released by Springbok Casino. It is a 5x4 reel video slot with 50 paylines, giving you plenty of ways to win. It pays left to right. You’ll find plenty of soccer themed characters and symbols to keep you in the spirit. This sporty slot has an incredibly generous RTP of 97%, that‘s massive for a slot and should make you feel like you have just scored the winning goal. At any time while playing Football Fortunes you can trigger one of the two jackpots. Who needs a premier league player’s salary when you claim such a great prize?

The game has been optimised for mobile, so you can even play it while watching a game live with your mates. Or if you prefer you can simply play it from the comfort of your couch. The symbols are appropriately football themed. There are players and refs, soccer attire, club logos and tournament trophies. The scatter in the game is the the mascot, look out for him because he’ll reward you with your Free Spins if you are playing in Rhino mode.

You might spot the ball on the first and last reel. It acts as the wild in the game and substitutes for all but the scatter. If the ball forms part of a winning combination your winnings will automatically be doubled. It’s also stacked, making it the gift that keeps giving.

Football Fortunes is actually two games in one, at the beginning you’ll be able to choose which mode you want to play in. Although the base game is pretty much identical, the difference comes into play relating to the Free Spins round. To enter the Free Spins round in Rhino Mode you need to collect at least three scatters, in Fortune Mode Free Spins can be randomly activated at any point at the end of a round in the base game. In Rhino Mode you can win up to 100 Free Spins. Collect 3 scatters for 8 Free Spins, 4 for 10 to 25 free spins. Find all 5 mascots and you’ll receive between 50 and 100 Free Spins. But the real winner in Rhino Mode is that you’ll receive a 3x multiplier on all your winnings during the round.

Free Spins can be re-triggered during either mode of the game.

The Penalty Kick Bonus can be won at any time during a Free Spins round, a mini ball icon will appear on all reels. You’ll then be able to take a shot on goal. Each successful kick will reward you a prize, the more you score, the bigger the reward. The final kick will be on the Golden Ball and can triple your reward. You’ll get the golden ball either after two misses or after eight goals. Get two in a row and your reward will be tripled again. 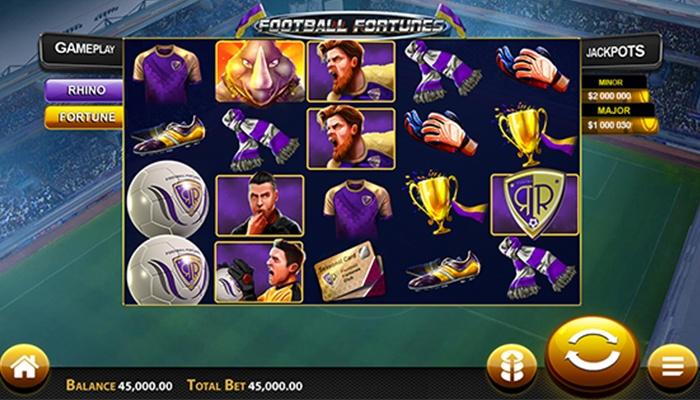 What’s not to like about a game that offers two games in one? There’s a reason soccer is so popular, and the football vibe is strong in this game. But even if you aren’t a fan, you’ll find something to love. Who wouldn’t want to receive up to 100 Free Spins. So, lace up your cleats and take your best shot at goal.