The gods are smiling down on us, in this new special Norse themed slot. Join Odin, Thor, Loki and Freya as you climb the tree of life up to the legendary hall of the gods at Asgard. There are plenty of divine gifts waiting for you when you reach the top.

Asgard Deluxe features exciting game play with 343 ways to win over 3x5 reels. Thor’s lightning really can hit twice, with several special elements including special wilds and several bonus rounds. At any point in the games, your stand the chance to win up to 2,000 times your bet, but the real excitement starts when you find three of more scatter symbols and activate the bonus round. During this round you can pick one of four fantastic bonus games, each with its own set of special god-like qualities.

If you pick 15 Free Games, the round will come with a 3x win multiplier.  With 20 Free Spins, you’ll enjoy Bursting Wilds. Wilds can replace symbols on reel three and turn the remaining symbols on the gameboard into wilds. Choose 25 Free Games and you’ll enjoy Multiplying Wilds. When any win occurs during this feature, any random symbol can morph into a Wild. The Symbol Replacement Wild will also act as a x2, x3, x4 or x6 multiplier if it forms part of a win. Finally, if you opt for 30 Free Games, you’ll receive Cascading Multiplying Wins, where winning symbols are randomly replaced by new symbols. Morphing will continue after each win, until no winning combination occurs.

During any of these Free Rounds, free spins can be retriggered. All Free Rounds are played at the qualifying bet.

Fit for the gods 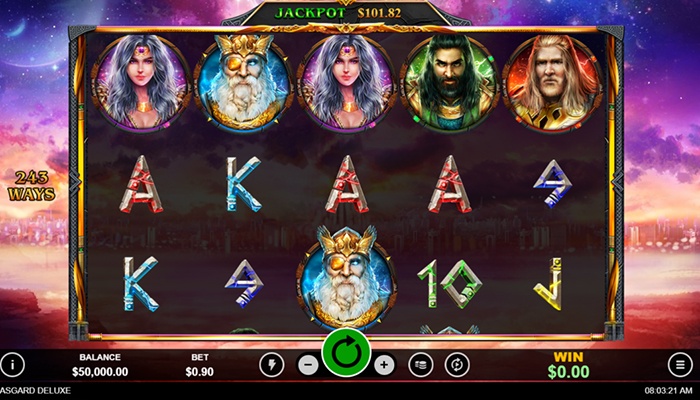 The Random Wild Reels Feature may be triggered only during the Base Game on any random spin. You may say, the gods go wild in this epic video slot.

Take the road to asgard

You can play Asgard Deluxe anywhere you find yourself. On your desktop at home, or on the go on your mobile. For sharper graphics, and smoother game play you might want to opt for the download version. Wherever you choose to play, remember it’s the journey, not the destination as you climb to the top of the tree of life in search for the legendary hall of gods at Asgard.