This is no Meerkat Manor. So, don’t call them cuddly. These critters are armed, dangerous, and digging in to defend their turf in our brand-new game, Meerkat Misfits! As you venture into the bush, you’ll be able to stand the chance of winning up to 2,000 times your bet. The game plays out over five reels with 30 fixed paylines. All symbols pay out left to right, except the scatter which pays both ways.

There are four special characters in the game, Scout, Hunter, Muscle Meerkat and the Commander. Each of them acts as a wild, substituting for all symbols but the scatter. Scout appears on reel two and has a 1x Multiplier. Hunter will double your winnings; you’ll find him on reel three. Muscle Meerkat will strong arm his way through the game to reel four, applying a 3x multiplier to the spin. The Commander, the leader of the gang, will quadruple your winnings. Find him on the last reel.

JOIN THE ARMY OF CRITTERS

Go on the hunt for scatters to trigger Free Spins. The Free Games are played out over four stages each with better chances of winning big. Three scatters will start you on your progression through the stages. Complete all four stages and you’ll be able to replay them all again. In the first stage you’ll get seven Free Games. Retrigger them during the round for seven more spins. Next up you’ll get eight Free Spins, each with a 2x multiplier on the Wilds. The third stage will give you the chance to triple your winnings when you find a Wild, along with nine more Free Games. In the last stage you’ll receive 10 Free Games with a 4x Multiplier applied to Wilds. 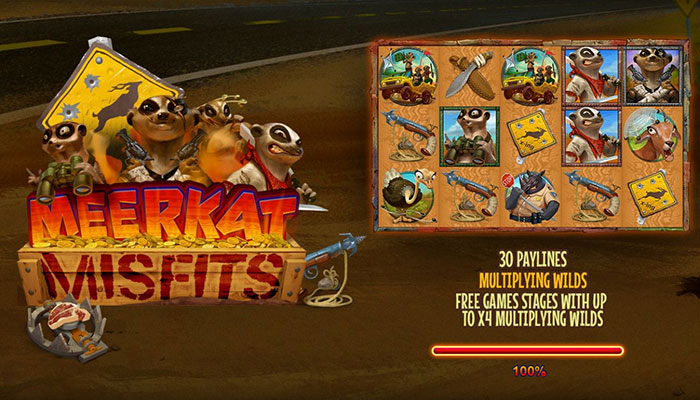 Venture into the bush with the ferocious gang of Meerkats to track down some wins. No need to jump on the game viewing vehicle in search of these critters, you can play Meerkat Misfits wherever you find yourself. On the go, on your mobile or at home on your desktop. Play right in your browser or downloaded to play it anytime.