Poker Fans, Get Your Mobile Devices Ready For 7th November

Springbok Mobile Casino just keeps getting bigger and better! As of 7th November, poker fans will get to access even more of their favourite games while on the move.

Our mobile Video Poker library is expanding quickly, bringing you five new variants of this skill-based game which has been enjoyed by gamers everywhere since 19th century.

Jacks or Better is a hugely popular, simple poker variant perfect for novice gamers. It will make it easy for you to learn the basics of betting and strategy development. As the name says, paying combinations begin with a pair of Jacks.

Loose Deuces change the rules. While almost in any other card game you’ll want to stay away from deuces, in this fun poker variant you should try to collect as many of them as you can. Not only will they act as a substitute for every other card, but wild royal and four-of-a-kinds which include them will deliver higher payouts.

Deuces Wild is another poker game which makes these normally low-value cards the heroes. While deuces act as jokers, the game delivers special payouts for five-of-a-kind and wild royal containing 2’s, as well as for 4 deuces.

Aces Eights, as the name suggests, gives high importance to these two cards. This sharp version of casino classic delivers high payouts for hands of four Aces and four Eights, which you’d expect, but also for four Sevens, which might come as a bit of surprise.

Bonus Poker will appeal to beginners and experts alike, offering them a chance to double their winnings on every hand. All you’ll need to do to win twice as much is pick a card higher than the one dealer turns.

All those poker games are now available for download, instant play and our mobile casino. 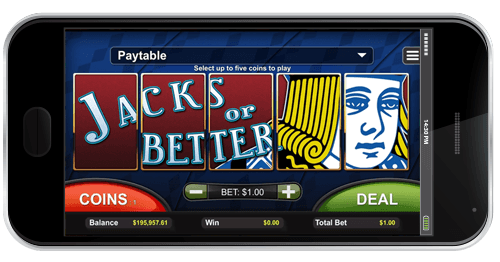 If you know these games have been developed by RTG, you won’t be surprised to find striking graphics, features and audio effects. Fun to play and potentially very lucrative, all of these video poker variants will now travel with you wherever you go. Springbok mobile site is easy to access via the browser of your iOS or Android mobile device and numerous safe banking options will allow you to potentially make money as well as get entertained.