Chinese mythology has already proven to be a rich source of inspiration for online games developers, and now RTG is using one of its creatures as the star of their soon-to-be-released Fucanglong slot. While in many Western countries dragons are considered to be aggressive and evil creatures, in China they are symbols of power and good luck. One of them is Fucanglong, said to be a guardian of precious metals and jewels buried in the Earth, its most valuable treasure being a magic pearl of unknown powers. The benevolent Fucanglong might decide to share its treasure with you, provided you’re brave enough to enter his home and spin the reels of the new RTG’s all-ways-pay slot.

While reels spin to reveal many of the precious items hidden underground, winning combinations are formed by symbols on adjacent reels from left to right. Wild is depicted as the Dragon, whose powers will allow it to stand in for all other symbols except Scatters.

Fucanglong slot 2 Scatter symbols, Dragon Pearl and Dragon Mountain. Landing 3 or more Dragon Mountain icons anywhere on the reels will award 8 Free Spins. If feature was activated by 4 or 5 Scatters, Dragon symbol will become an expanding Wild. While you’re spinning for free, Multiplier value will raise to a maximum of x8, increased by 1 with every new 3+ Scatters on the reels. At the same time, 3 additional free games will be awarded.

Scattered magic Pearl will deliver 8 Free Spins if you manage to get 3 of them to appear anywhere on the reels. After you use up your free games, the Pearl will reveal a value of 3x to 88x the triggering bet. If your total free games win is lower than the Pearl number, the Fucanglong feature will get triggered.

You’ll then continue spinning for free until your total feature win reaches the value Pearl has revealed. But wait! With each extra free game, Pearl value will increase by 1x to 8x the triggering bet, and can go as high as 888x the bet value. Any Wild Dragons which appear during the Fucanglong feature, expand to cover their entire reel.

Fucanglong slot will be available in download, instant play and our mobile casino. 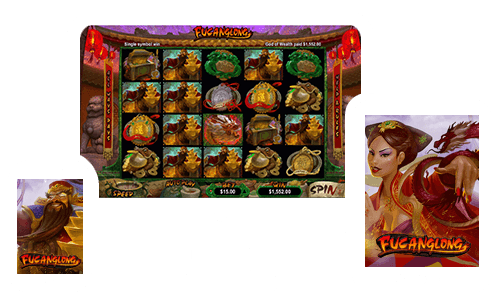 Sounds exciting, doesn’t it? To further entice you to enter Fucanglong’s realm, we’ll tell you that if you find the right way to approach this powerful dragon, you could walk out with a maximum win of 3,104x bet per way. Not just yet, though. This new RTG slot is set to be released on 11th January 2017, so make sure you mark this date in your calendars and visit Springbok in January to meet its new generous inhabitant. In meantime, we’ll be happy to see you and share an abundance of gifts prepared especially for this year’s Christmas season.