Stay tuned as Springbok Casino gets ready to launch Megaquarium slot with a marine theme. Currently available teaser does not reveal much (probably that’s why it’s called a teaser) but does indicate this will be another cheerful little gem coming out of RTG factory. Watch out, though, there’s much more to this game than fun gameplay. Everybody who likes Nemo the clown fish will instanty fall in love with Megaquarium.

Megaquarium Slot plays on 5 reels and 50 flexible paylines, with the reel area sunken deep under the ocean. Apart from the standard Autoplay function, it seems we’ll also be able to control the speed of the game. Reels reveal numerous underwater creatures, such as colourful fish, funny little crabs and corals, joined by No Fishing sign and a Chest of Gold. Occurring only on reels 2 and 4, Wild symbol is represented by clownfish, and it not only substitutes for other icons but also doubles the amounts won. 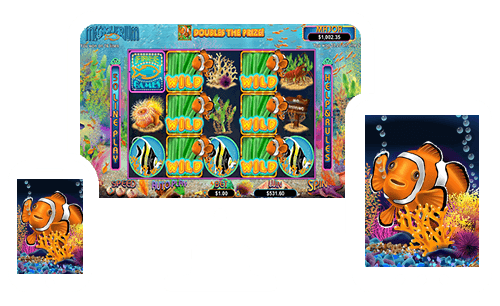 The game comes equipped with a free spins feature, activated by two neon Free Games signs. While you’re spinning multiple times on just one bet, all your wins will be doubled. Should the Bonus Game icon appear on reels 1, 2 and 3 on your 7th spin, feature play is extended.

You’ll get additional free spins, with reel 5 populated by Clown Fish Wilds. Super Games symbols are added to first 3 reels and can further extend the feature. After each bonus game, a random prize of up to 100 times your bet is awarded. Super Game feature extension gets you another 3 Free Games and x5 prize multiplier.

Mega Games icons which are now added to the reels can once again extend the feature, and a prize of up to 200x your bet is awarded after each Super Game. The Mega Game comes with reels  4 and 5 made up entirely of Clown Fish Wilds and a random prize which can go as high as staggering 500 times the bet value.

The game also features 2 Progressive Jackpots that are triggered at random and can be won after any of your spins. It’s clear Megaquarium will not only be fun to play but also provide multiple winning opportunities and huge potential wins. Be among the first to test it out as it launches in Springbok Casino on February 15th.

Enjoy Megaquarium Slot wherever you want

Megaquarium slot will be available for our mobile casino, download casino and instant play casino.

Also visit our facebook page for more promotions and information.