New RTG video slot is about to follow recently released Purrfect Pets and Cash Bandits 2, and if these two successful launches are anything to go by, we’re in for another treat. The title, Kung Fu Rooster, makes it pretty obvious that once again Realtime Gaming has gone with a proven formula of  Asian-themed slots built on the Chinese mythology. In this one Wild Rooster will team up with the Scattered Monkey and offer you helpful tools to snatch a hefty 50,000x stake jackpot.

The visually attractive video slot features Lotus, Yin Yang and several other Chinese-themed symbols forming winning combos across 5 reels and 12 paylines. Wild Rooster might not announce its presence with the characteristic cock-a-doodle-doo, but he’ll kindly offer assistance by substituting for all other icons except his animal friend, the Scattered Monkey.

The latter pays handsomely on its own but also triggers Fire Trials Bonus round and awards up to 25 free spins. If you’re lucky, the Fire Claw Multiplier will be active during the feature and boost your wins. You’ll start spinning for free with  x1, increase the multiplier to x2 on the second spin, x3 on the third, and so on. Getting the max 25 free games means the prize will be multiplied by an impressive x25.

Kung Fu Rooster Slot may be a bit simpler in terms of special features than some of the other RTG games, plus it comes without the progressives offered by its two predecessors, but it’s win potential is nevertheless huge: it can pay as much as 50,000 times your line bet. Now wouldn’t that be a nice wake-up call!

Springbok Celebrates the Year of the Rooster

Did you know that in China 2017 was Year of the Rooster? The Rooster is actually 10th of 12 animals in the Chinese zodiac cycle, where each of the symbols not only links to a particular animal but also one of 5 elements: Gold , Wood, Water, Fire or Earth. Well familiar with the Chinese mythology, RTG has decided to mark Fire Rooster year with an appropriately themed game to be released on 19th July. Come check how lucky it is for you, and meanwhile stay tuned as this prolific developer already announces their next release, a video slot called Gemtopia. 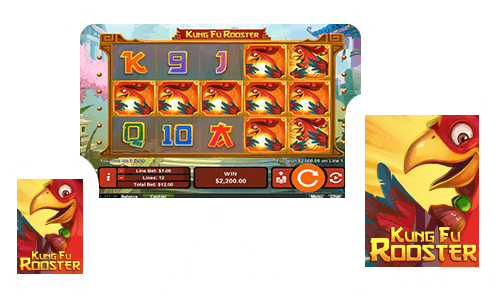 Kunf Fu Rooster will be available in our mobile casino, instant play casino and download casino.