Halloween under the Spell of Bubble Bubble 2

Hugely popular Bubble Bubble finally gets its sequel Bubble Bubble 2 and we're super-excited to welcome it to our library.  Seeing how the original game never failed to make it to top played slots at Springbok, one might have doubts if the new title can replicate this success.

We're not worried, though, knowing that in Bubble Bubble 2 Winnie the witch gets a visit from her cheeky sister Wanda with equally impressive magic skills. Does this double trouble also mean you'll have twice as much fun? Let's see...

Let's remind ourselves of how the original played. It featured 5 reels and 50 paylines, with Winnie acting Wild, expanding to cover the entire reel and tripling the prize. Scatters activated one of three features, either Wild Witches, Great Ghosts, or Bewitched. The first would launch free spins with Winnie casting a spell to turn one or two other reels fully Wild, and additionally came with Win-Win feature which guaranteed a win of up to 100x your stake. Great Ghosts feature offered free games with Wild ghosts flying onto the reels after every Scatter win, while Bewitched let you play for free with Winnie permanently occupying the entire middle reel.

So what has changed? First of all, you'll have two Wild witches to reckon with, Winnie and Wanda, along with the familiar Wild Ghosts and an additional Wild icon. Sisters will only appear on reels 1 and 5, stretching in full and tripling the win individually, or multiplying it x9 if they both contributed to the same winning combo. 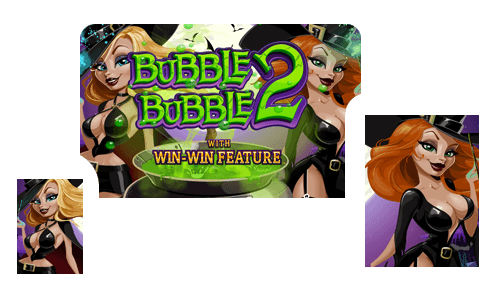 Line up Scatters from left to right and you'll get prompted to choose among wands to reveal one of 3 features. Greater Ghosts feature does the same as last time, offering 20 free games with up to 9 Wild Ghosts. Ultra Bewitched feature once again triggers 7 free spins with a minimum of one expanded Wild – either Winnie covering the entire first reel, Wanda stretching over reel 5, or both showing up simultaneously. Wilder Witches feature, once again with Win-Win included, awards 9 spins with witches casting a spell. If both sisters make the appearance at the same time, they will either cast a spell to turn the middle reel Wild, add 33 extra free games, or do both. Play nice with two charming witches and they might reward you by as much as 9,000x your line bet.

If you liked Bubble Bubble, you'll love the sequel. How could you not, with all the extras Realtime Gaming has included while not taking away any of the goodies we've enjoyed in the original title. The magic happens once again as of 11th October, so make sure to be among the first to meet lovely Wanda enjoy additional treats. And while you're getting spellbound by the mischievous sisters, keep an eye on another new RTG release which has already been announced - Swindle All The Way.

Bubble Bubble 2 will be available in our mobile casino, instant play casino and download casino.