Looking for a slot which will let you take a break from Earth and spend some time in an otherworldly environment with extraordinary entities and mythological beings? Look no more, RTG’s Asgard is here! Here at Springbok is your gate that leads to Asgard, home of Odin, Loki and Thor, mighty Norse gods. In their eternal quarrelling and stormy confrontations, you are the one who can take pleasure in spinning the reels and collecting the wins.

With an evident Viking feel, Asgard introduces four characters; Odin, Loki, Thor and a Goddess are placed against a stormy and icy background, a representation of the Asgardian surroundings. Do gods feel the cold? More importantly, are they grumpy if they do?

Don’t be concerned about these details, set your bet and start winning across all 243 ways because there are no standard paying lines in Asgard.

A God for Each Feature

Cleverly, RTG has assigned four different special features to the Asgard slot game. The Golden Wild will make the base game more interesting by substituting other regular symbols, but it’s the Scatter BONUS symbol you should particularly pay attention to. Three of the Scatter symbols will trigger the main bonus round, which is actually a choice of rounds. The Player gets to choose among Loki’s Magic, Thunder God Feature, Goddess Feature and Valhalla Feature. The bonuses are godlike – from 15 free spins with tripled wins and 20 free spins with added Wilds to 25 free games with Wild multipliers and 30 free games with morphing symbols. The Thunder God Feature and the Valhalla Feature can be retriggered and 5 extra free spins will be added to the free spins total for the round. Asgard offers another thrilling special feature – it called Thunderbolt feature and it happens randomly during the game, turning up to 5 reels Wild for more divine wins! 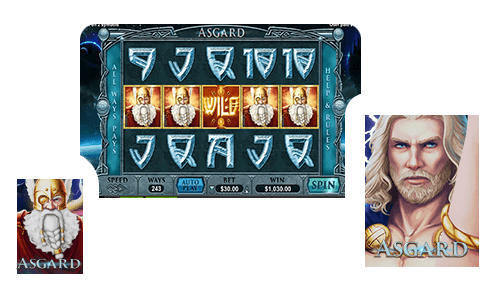 You can spin our way through the storm on mobile, desktop and through downloadable RTG software. Choose your god and choose your platform, because Asgard is closer that you think!

The Mighty Asgardians and More to Look Forward to from RTG

The timing for Asgard is perfect; as Thor: Ragnarok is galloping through movie theatres around the world, bringing the thunder god from the Marvel Universe back to life once again, Asgard became available online as one of RTG’s most exciting releases in recent months. But, the company won’t take a vacation after this. Oh, no! They have more tasty projects to work on as intriguing games like Fu Chi and Shanghai Lights have already been announced. Seems like RTG will be visiting exotic Asian territories after icy Asgard!