Step Into the Arena - Lucha Libre 2 is Here

If you’re a fan of American pro wrestling you need to check out Lucha Libre - Mexican professional wrestling, an entertaining type of combat sport with a spectacular twist. Mexican wrestlers, aka luchadores, wear colourful masks as part of their in-ring persona or gimmick and fight using ‘high-flying’ manoeuvres. The whole show is quite a spectacle and it forms part of Mexican culture, tightly related to Mexican cuisine and the overall vibrant spirit of the Mexican people. Elements of both the combat and Mexican culture and food are all present in the new Lucha Libre slot adaptation deemed Lucha Libre 2. Scheduled for release on April 18th 2018, this new RTG video slot will be a feast for both your eyes and your stomach with symbols like luchadores, chilli peppers, hot spice and tequila!

Adopt the Fist of Fury and Strike the Final Blow

The reel set is positioned at the centre of the combat ring. The crowd is cheering and the mariachis are maintaining a lively audience with their upbeat melodies. The two mighty fighters are ready to rumble - Taco Malo will take on Nacho Friend in a spectacular duel. There are 5 reels and 3 rows of symbols in the game, accompanied by 30 variable paying lines. All symbols pay left to right except for the Mucho Mayhem Scatter. The symbols include a bottle of hot sauce, a green pepper, luchador trading cards, a match announcement poster, a shot of tequila and the match referee. Aside from the Mucho Mayhem, there is also a Fist Scatter which pays left to right except in the Fist of Fury feature.

The two wrestlers are Wilds and they substitute other symbols in the following manner: they appear as Grouped Wilds on reel 3 during base game and substitute regular icons albeit the Scatters. The wrestler symbol can cover the entire reel and in that case it will either multiply prizes that include a Wild (2x, 3x or 10x multiplier) or jump onto one more reel at least.

The show becomes even more exciting when the Time to Rumble feature is triggered with 3 Mucho Mayhem symbols. In this fun feature the player gets to choose among 3 different moves, stepping into the shoes of Taco Malo and hoping to defeat the hulking Nacho Friend. To top it off, the slot offers you a random free games round, packed with Scattered Fists, multipliers and random re-spins. Dodge the Fist of Fury and let your opponent kiss the ground as you march out of the arena victoriously! 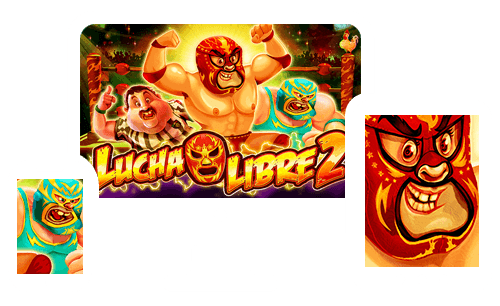 Success in the Ring Equals Money on Your Springbok Balance

Lucha Libre 2 is not a progressive jackpot slot machine, but the lucrative features compensate for the lack of a massive prize payout. The game’s top reward is 50,000 times bet per line and that launches Lucha Libre 2 into the very top of RTG slots, payout-wise. Stand by for this fearsome machine as it storms into Springbok on April 18th and keep your eyes open for new RTG announcements San Guo Zheng Ba and Tian Di Yuan Su.