Sometimes it’s hard to decide which is more interesting - Chinese culture, tradition and religion or Chinese history. Real Time Gaming decided to pick a historic theme to develop their San Guo Zheng Ba slot. The game title roughly translates to ‘The Power of the Three Kingdoms’ and refers to the end of Han Dynasty. As one of the bloodiest periods in history of China, the Three Kingdoms period sees three kingdoms contending to succeed Han and form a new dynasty. The period was described in the novel The Romance of Three Kingdoms, written by Luo Guanzhong in the 14th century. Which king will you support in this merciless battle?

Three Kingdoms, Three Emperors and All of China’s Riches

The most interesting and romantic era in China’s long history, the Three Kingdoms serve as excellent background to the intriguing gameplay and swift payouts of RTG’s San Guo Zheng Ba slot. The game applies amazing graphics and portrays the magnificence of Chinese palace life. Ultimately, the Emperors symbol acts as a Scatter and proves to be essential for the special features. The Golden Dragon is the game’s Wild and it appears on the middle reel only (reel 3) in the base game. When the dragon lands, it will expand to cover all the positions on the said reel and the software will then calculate the win value. San Guo Zheng Ba benefits from 5 reels and 50 variable paylines. That means the players can adjust the number of active lines as they like, set the bet size and then hit the Spin button.  All symbols pay left to right, albeit the special Golden Dragon Symbol.

The biggest wins occur during free games. What’s even better is that San Guo Zheng Ba offers two free games special features. The San Guo Zheng Ba Free Games feature gets triggered when 3 or more Scatter Emperors symbols appear on the reels. A total of 5 freebies is rewarded. During free games the Wild appears on reels 3, 4 and 5. Wins including Wilds are doubled and the Scatter pays for two of a kind.  The feature can be retriggered up to 5 times, but only after the Super Spin Free Games feature ends, which is the other free games mode available. The Super Spin Free Games automatically starts when the 5 initial freebies are played; it adds 3 Super Spins with upgrades such as Wild reels, multipliers, extra Super Spins and additional grouped Empress symbols. 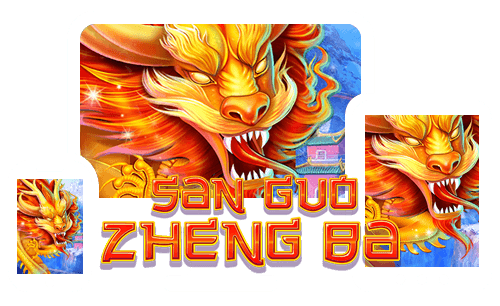 Claim the Treasures of the Dynasty and Become the Ruler

How cool would that be - to become the almighty ruler of AD China! If you succeed to overcome the persistent political intrigue you’ll earn a chance to play for the top payout of 50,000 times bet per line. San Guo Zheng Ba will become available on Springbok downloadable client, instant play platform and mobile version on May 23rd, so you can start counting days until it arrives and start building your warfare strategy.