What better place to experience an adventure than in a secret jungle? Just think about it - hidden temples and artefacts, extraordinary creatures in the shadows of trees and bushes and an occasional bump-in with multipliers just to make things a dash more interesting. We’re quite accustomed to RTG delivering detailed slots in high quality, and they lived up to the standard once again with Secret Jungle. Breathtaking visuals will take you straight into the depths of the jungle and you won’t be getting out any time soon - not before you collect as many Idol symbols as possible and boost your balance to the max. The top award in Secret Jungle is 50,000 times bet per line, and all Springbok players will have a chance to go at it starting June 20th 2018.

RTG is no stranger to adventure slots set in the jungle - just look at their last year’s release Secret Symbol. It was inspired by the lost Aztec civilisation and it features dense trees, waterfalls, animals and some beautifully designed items that fit the theme - no playing cards involved. With Secret Jungle, it’s a similar story. The inspiration came from lost civilisations that once reigned the jungles of Central and South America as well as from the wildlife that still remains in the deep jungle. Using such flamboyant theme, RTB applied a proven structure, 5 reels and 50 paying lines with the possibility of reducing the number of active lines to your own liking. 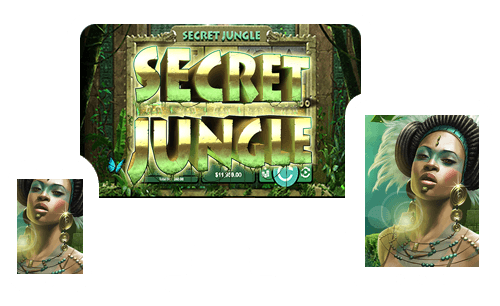 All game symbols pay left to right, as is the common practice, and the only exception is the Scatter symbol which is represented by a Pyramid/Temple. The Idol icon is the substitution symbol, or the Wild. It appears on all reels and replaces all standard game symbols - not the Scatter, though. When Wild becomes part of a wining combo, the payout triples! Scatter wins are paid in any position on the reels.

Secret Jungle offers free games in three ways; the free spins round is triggered with 3, 4 or 5 Pyramid symbols anywhere on the reels, and the player is then rewarded with 8, 18 or 88 free games. Triggering the round with more than 3 Scatters introduces a 2x multiplier on any wins. Reactivating the bonus feature, which is possible, adds 3 more free games and multipliers up to 10x the win. Theoretically, it’s allowed to retrigger the free games up to a maximum of 8 times.

Even though Secret Jungle isn’t packed with special features, the one main feature is creative and lucrative. Everybody loves free games, and Secret Jungle may award you with 88 free spins in one take! One other great thing about the latest RTG product is that it is playable through a downloadable client, instant in-browser platform and mobile device. You can take your secret wild treasures with you wherever you go and access them whenever you want through your Springbok account. Join the expedition deep into Secret Jungle on June 20th, only days away!