Explore Chinese Mysticism and the Universe of the Ancient Gods

Welcome Ancient Gods, the newest release from Real Time Gaming, soon to go live at Springbok downloadable, instant play, mobile and native app platforms. RTG was always bold enough to find inspiration is ancient legends, myths and folklore and this time the developer has recognised magnificence, power and payout potential in the ancient Chinese story about the Four Heavenly Guardians. These were beasts, celestial beings in bodies of animals and mythological creatures that were given the task to each guard a direction on the compass and each had a seven-constellation realm to watch out for. Each of them is associated with different elements and seasons.

The mighty entities are the Azure Dragon of the East (representing spring and wood), The White Tiger of the West (representing autumn and metal), The Black Tortoise of the North (representing winter and water) and The Vermillion Sparrow of the South (representing summer and fire). The tortoise is often depicted as a two-headed turtle/snake hybrid and the sparrow is commonly seen as the phoenix. You will see these magnificent creatures on the reels of Ancient Gods by RTG, and they will come alive as you spin the reels, starting with July 4th.

Free Games and Scatter Pays, Courtesy of the Ancient Gods

Once you load the game, the Ancient Gods appear on the reels, as well as their respective orb symbols, representing recognisable patterns (scales for snake/turtle, tiger skin and so on). The slot operates via standard 5x3 reel structure and has 25 paying lines to offer. The number of lines can be adjusted and the players can also determine the size of their bets per spin. Ancient Gods comes complete with an Autoplay option, some special Wild action and a Free Games round. There is a substitution symbol, aka the Wild, which is represented by the Centre Dragon, a version of the Yellow Dragon of Earth which also has its place in the Protectors of the Heavens myth. The Wild has its conventional role of substitution regular symbols, but it also has an additional perk or multiplying once it appears along with the Scatter. Two extra Wilds can appear on the reel that already shows Scatters and Wilds, multiplying the initial win payout. The Scatter is depicted as a Golden Medallion and three of them anywhere on the reel grid will trigger free games. The round starts with 2 free plays awarded to each of the triggering symbols.  All the Wilds and Scatters that appear during free games will add more Wilds on the screen. If 4 Scatters initially trigger the game all the wins are doubled, and if you activate the feature with 5 Scatter, the wins are tripled. More good news: the free games can be retriggered!

The Ancient Gods are in the Mood to Reward

The latest Real Time Gaming slot has a maximum payout of 7,500 times bet per line, which classifies as the payout of the gods! Activate all those lines, and max up the bet and you’ll get to heavenly heights on the back of a turtle, or the wings of the phoenix, whichever you prefer. On July 4th Ancient Gods goes live at Springbok and from then on you can always befriend the Immortal Beasts of Eden on your pursuit of casino luck. 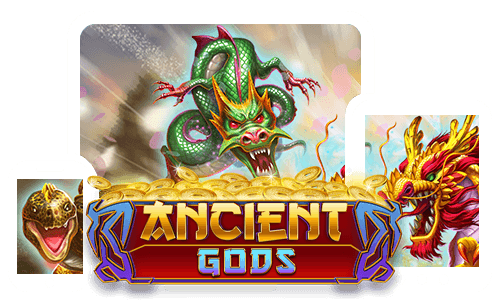