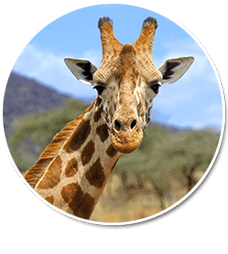 Giraffes, they are just cool!

Usually found in African savannahs and woodlands, giraffes are extraordinary creatures with multiple distinguishing characteristics. The giraffe is the tallest living terrestrial animal and its peculiar appearance has fascinated many cultures through history, featuring in numerous books, paintings and cartoons.

Its conservation status is classified by the International Union for Conservation of Nature as “vulnerable” and most of the population is now found in national parks and game reserves. Let’s celebrate the giraffes by learning some cool facts about them!

The giraffe’s unmistakably long and unusual neck is the first thing that comes to mind on the mention of this strange-looking leggy herbivore. The tallest animal in the world has a neck that is 180 centimetres long, yet it is too short to reach the ground. The longest neck in the world has 7 seven vertebrae, the same as in humans. A giraffe’s vertebra is heavier than the one in human and it is usually 25 cm long. Also, it’s interesting to know that the neck is the same length as the legs of a giraffe. While such a long neck is extremely advantageous when it comes to reaching the highest leaves from trees, the animal can’t simply bend its neck forward. When a giraffe drinks water, it has to awkwardly splay their forelegs and bend their knees so that they can lower their necks and reach the ground. Luckily, giraffes get most of their water from their plant-based diet and drink water once every few days.

A long, elegant giraffe’s neck is also used in a less elegant activity – combat between males. They use their necks as weapons, engaging in a behaviour referred to as "necking". The conflict can be of low or high intensity and include both rubbing and full blows after swinging the neck. Giraffes have hair-covered horns called ossicones, and this is where their use becomes apparent.

While necking, males will also try to use their ossicones to fight their opponents and establish dominance in order to have greater reproductive success. A necking duel can last more than half an hour and most deaths do not lead to serious injury.

What Do Giraffes Eat?

As we’ve hinted earlier, giraffes mostly eat plants - fresh leaves and twigs from the treetops. The spiky acacia tree is their favourite. Privileged to be able to reach what the other browsing species cannot, they can feast for themselves and pick the best of what nature can offer. Since the tallest trees tend to have the deepest roots and reach down to water in times of drought, giraffes do very well in these times of hardship for smaller animals. Nevertheless, a giraffe’s diet is not strictly vegetarian. Due to their huge skeleton, they require more calcium and phosphorous then they get from plants. To compensate, giraffes engage in osteophagy – chewing he bones from carcasses to make their own bones stronger.

Okapi is the only living relative of the giraffe. An extremely rare animal, the okapi has a shorter neck and dwells in the forest. It is often called the zebra giraffe because it has black-and-white hind stripes reminiscent of zebras. Standing at 1.5 m (4 ft 11 in) tall, the okapi is medium-sized and uses its stripes as effective camouflage amidst dense vegetation. Okapis are herbivores, feeding on tree leaves and buds, grasses, ferns, fruits, overall on over 100 different species of plants, and also fungi. They have a long tongue which also helps them to groom their ears and eyes.

A Unique Pattern for a Unique Animal

Don’t judge a giraffe by its spots! A giraffe’s spots are and identifying factor and are alike human fingerprints. No two individual giraffes have exactly the same pattern. The patterned skin is often described as similar to “burnt popcorn”. Giraffes have an exceptional coat and scientist usually observe the patterns to tell the difference between the sub-species. The giraffe's scientific name, Giraffa Camelopardalis, is a result of how ancient Greeks saw it – like a camel wearing a leopard's coat.

A female giraffe is pregnant for 15 months. After the gestation period is over, the mom will remain standing up to give birth to her baby. If the mother were to lie down to give birth, the baby giraffe would be crushed. This way, the baby giraffe has to endure a mini skydive, falling more than 5 feet to the ground. Luckily, the younglings are tough enough and able to stand in half an hour! Within just 10 hours of their birth, baby giraffes can run and keep up with the adults without any problems. New-born giraffes stand at around 6 feet tall, which means they are already taller than most humans. For the first four to six months of life, the baby feeds only on mother’s milk, and afterwards it starts to munch on low-growing sprouts and leaves. In their first week, babies grow 1 inch (2,54cm) every day. For the first five months of their lives, younglings play together in a type of a day-care arrangement with one female giraffe babysitting while their mothers are usually away for food.

Having such an unusual shape and a large body, giraffes have a highly-specialised cardiovascular system. Their heart is enormous, weighing approximately 11kg. It is the largest heart of any land mammal. An average human heart weighs between 0.2-0.45kg, which means that the size of a giraffe’s heart is equal to approximately 50 human hearts. The monster muscle engine can pump 60 litres of blood around a giraffe’s body a minute, at a blood pressure twice that of an average human.

The massive herbivore that is the giraffe needs an adequate tool to fetch all those tasty leaves and twigs. While they enjoy exclusive VIP access to the freshest leaves from the tallest trees, giraffes use their extraordinary 20-inches long tongues to forage on thorny delicacies. The tongue is dark-blue-purplish, almost black, in colour, which is believed to be a form of sun protection. It helps them feed while enduring frequent sun-exposure. Giraffes eat up to 70 pounds of food a day and never suffer from sunburns!

These gentle giants rarely lay down to sleep, especially in the wild. Such a position, which is utterly adorable, with their head calmly resting on their rear and their neck bent around their body, would make them vulnerable to predators. Although giraffes have no competition when it comes to food, they are prey for hyenas and lions. That is why they must remain alert. How do they rest then? They take frequent micro naps while standing! The naps take no more than 5-6 minutes. In fact, most of them get around 10 minutes to 2 hours of sleep per day, around 30 minutes on average. They can boast having one of the shortest sleep requirements of any mammal.

Giraffes on the Move

When standing still, a group of giraffes is called a tower. When moving, the group is conveniently called a journey. Giraffes can walk and gallop, and they can be pretty fast runners. Interestingly, their long neck isn’t just for reaching high leaves, as these animals use their necks for momentum. At top speed, giraffes can run up to 35mph over short distances. The neck also allows them to propel themselves upwards from a sitting position and provides balance.

A giraffe is an iconic African animal and deserves attention through conservation and educational efforts. Hopefully, we’ve made you like this graceful mammoth and tickled your interest to know even more about it. Keep reading about giraffes at Springbok, as we’ll continue to bring you thought-inspiring content.

Giraffes are much more than just tall horses. They are gentle, kind animals capable of being adorable, protective, calm, scared, determined, sociable, playful and funny! Long legs and long neck are the most recognisable traits in a giraffe, but how about getting to know them a bit better through their behaviour in the following videos that will surely make you chuckle?

Abandoned giraffe watched over by dog in South Africa

In Limpopo province in South Africa, a baby giraffe was found in a comatose state. Named Jazz, the baby was probably abandoned by its mother for some reason, but luckily it is now recovering at The Rhino Orphanage. Jazz arrived at the orphanage when he was just 2 days old and was very weak, so weak that the caretakers had to give it IV fluids. The youngling is doing much better, being fed milk and slowly starting to eat leaves.

The cheeky little giraffe is being watched over by his friend, Hunter the dog. Until Jazz is well enough to go back into the wild, Hunter keeps him company and they nap together. Adorable!

Eating Breakfast with Giraffes In Africa

Thanks to the skillful eye of Robin Moore, the photographer, we have a chance to peek inside Giraffe Manor, an exclusive boutique hotel, set in 12 acres of private land within 140 acres of indigenous forest in the Langata suburb of Nairobi. As fascinating as the establishment itself is, the most attractive thing about Giraffe Manor is a visit from one of the Rothschild’s giraffes.

The gentle giants live here in the nearby forest and often poke their long necks into the windows in the hope of getting a treat from the patrons. Whether one receives a lick or gets their breakfast stolen from their bowl, it is impossible not to have a memorable, heart-warming experience at Giraffe Manor.

Imagine being in a restaurant, casually eating your dinner and chatting when suddenly you feel compelled to address the giraffe in the room? Yes, this actually happened in a restaurant tent at The Lion Park near Johannesburg in South Africa when a female giraffe walked in as if it was about to make an order.

Apparently, the lady wanted a salad but since no one was helping her with her order, she started munching on the potent plant she found nearby. After enjoying a moment of stardom, being photographed and filmed by the people at the restaurant, the giraffe moved on in pursuit of the perfect dinner. Hilarious!

Perhaps the goofiest thing about giraffes is how they drink water. Being so tall and having such an unusual body, they still have to reach the ground if they want a sip of cool, life-sustaining water. The position they need to adopt in order to do that is, well… awkward. They kneel by spreading open their front legs, because they can’t bend their neck enough to reach down and sink its puckered lips into the watering hole.

After you’ve seen this video, it is possible you will never look at a giraffe the same. The gravity-defying act looks utterly ridiculous. But hey, if it works, it works! Luckily, they only have to subject themselves to this ungainly position once every few days.

A Neck and Neck Battle

What is merely playful jousting in their youth, giraffes turn into a fighting technique as adults. Mature males engage in neck and neck battles to establish dominance and win over female members of the group. Many describe this as the gentlest animal fight ever. The phenomenon is called necking and involves two bull giraffes rubbing and swaying their necks so as to defeat the opponent.

The event rarely causes any serious injuries and most of the time it looks like some form of dance, or simply a hugging session. The ritual is entirely unique to their species and deserves being witnessed and smiled upon.