Behold the hippopotamus!
We laugh at how he looks to us,
And yet in moments dank and grim,
I wonder how we look to him.

Peace, peace, thou hippopotamus!
We really look all right to us,
As you no doubt delight the eye
Of other hippopotami.

This month we’ll be celebrating another iconic African animal – this time it’s the hefty, humungous hippopotamus. Their name is derived via Latin from the ancient Greek words for  ‘horse of the river’ or ‘river horse’ ­ (hippos – horse, potamos – river). Well, they don’t look much like horses, definitely more like pigs or perhaps cows. However – believe it or not – the hippopotamus’s closest living relatives are cetaceans – whales, dolphins and porpoises! Hippos diverged from these purely aquatic mammals about 55 million years ago. Read on for more fascinating facts about these fabulous fatties.

In ancient times, hippos were once common in the Nile River in Egypt (hence the Greeks and Romans were familiar with these animals and named them). Although some Egyptian deities were represented in the form of a hippopotamus, like the fertility goddess Tawaret, hippos were notorious for overturning fishing boats and destroying crops. Both feared and revered, they were eventually all killed off through hunting. 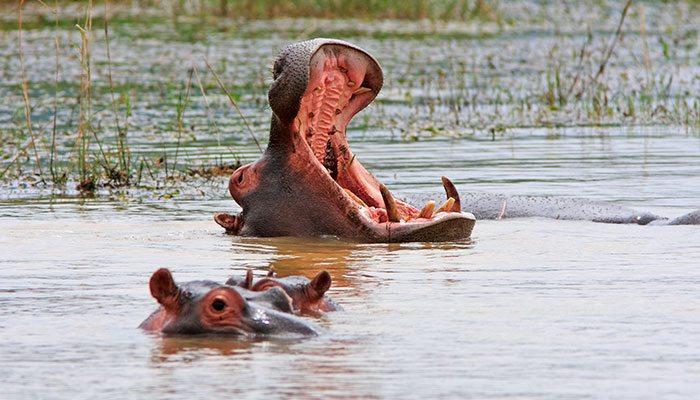 Pharaohs were depicted in art killing hippos, and it’s possible that young King Tut was killed by a hippo while out hunting. This was all kept very hush-hush, as it was seen as a bad omen in this very superstitious culture, so we will never really know how this famous young man met his untimely end. Revenge of the Hippo in 1324 BC?

Where do hippos live?

Nowadays, hippos can are spread throughout many sub-Saharan countries. They are found in the rivers and lakes of Ethiopia, Somalia, Sudan, The Gambia, Democratic Republic of Congo, Uganda, Tanzania, Kenya, the Okavango Delta in Botswana and South Africa. 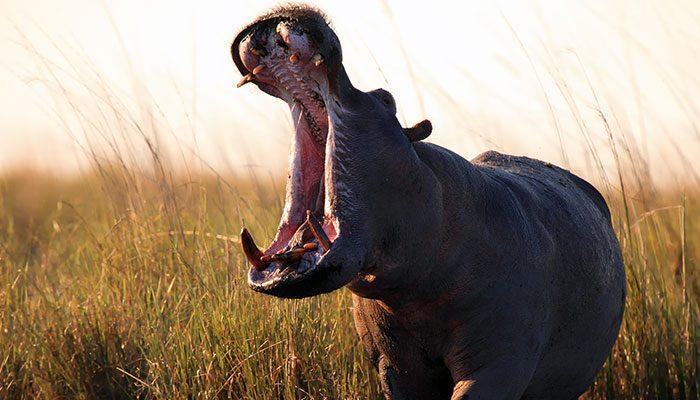 Here in South Africa, the largest number of hippos are located in Lake St Lucia, South Africa's very first world heritage site. The area is home to about 800 hippos, a few of which can sometimes be seen roaming the streets of the nearby town at night on their way to forage. They are also found in the Kruger National Park and other nature reserves wherever there are lakes, vleis or rivers.

Hippos were once common in Cape Town’s wetland areas too (hence the name Zeekoevlei – ‘sea cow vlei’) but were rendered extinct in the 1700s, mostly by hunters who shot the animals to supply meat to passing ships. Cape Town is still home to a few hippos at Rondevlei Nature Reserve, who were brought here in the 1980s to control invasive grasses. In fact, a young hippo escaped from Rondevlei in 2012 and made its way to Zeekoevlei, thus reinstating the meaning of this body of water. Eventually, the young wanderer was shepherded back to his or her group in Rondevlei.

Compared to the blue whale, whose body weight comprises 35% fat, a hippo isn’t really that fat at all. Its dumpy body and sturdy legs are covered in a 5 cm thick layer of hairless skin, and underneath that only a relatively thin later of fat. Their skin contributes to 18% of their overall body weight! 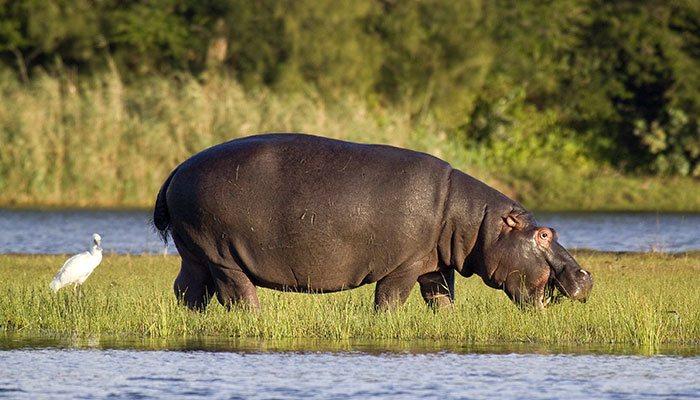 In the heavyweight stakes, hippos are nearly right up there with the other megafauna. After elephants and white rhinos, hippos are the third-largest land animal. The average weight of a fully-grown hippo is about 1,500 kgs, and large males can weigh up to 2,000 kg. But don’t be fooled by their chunky, lumbering appearance and short, stumpy legs – a hippo on the trot can reach speeds of up 30km per hour in short bursts.

There is one other species of hippo – the pygmy hippopotamus, and these cuties are very small in comparison (160 – 275 kg as adults). They are very reclusive and are found in West Africa, mainly in the forests and swamps of Liberia, with smaller populations in Sierra Leone, Guinea and Ivory Coast.

How do hippos spend their days (and nights)?

During the day, hippos spend up to 16 hours immersed in water, to keep cool in the blazing African sun. Mostly, all you see of hippos in the water are their ears, eyes and nostrils peeking out above the water line. Hippos congregate in large groups in water, probably for protection against predators like crocodiles. They don’t feed in the water, even if aquatic plants are available. 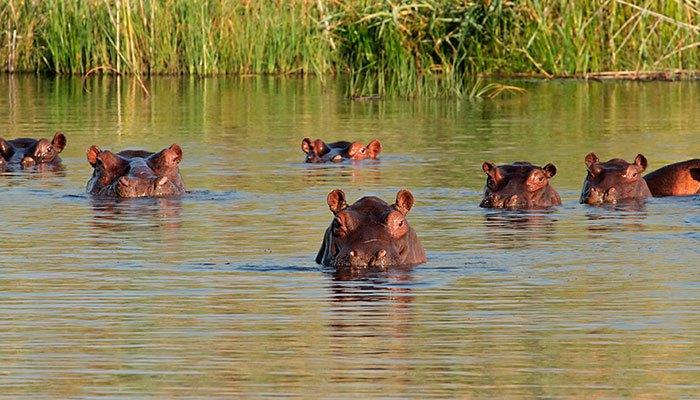 At night, hippos leave the water and go foraging for food, usually various grasses, young shoots and reeds, or if tasty crops are growing nearby, they’ll go for those too. Unlike other herbivores, they don’t chew their food but just crop or tear up the grasses with their lips and huge teeth and immediately swallow it. Hippos have especially long digestive tracts, which allows this food to be fully processed and as many nutrients as possible absorbed from it.

This is the time when they are most dangerous to humans. Do not get between a hippo and his or her path back to the water, or you may not live to regret it! It must be said that hippos might look benign and a bit goofy, but they have also been known to kill and eat animals like impala, kudu and even buffalo! They have immensely large and sharp teeth (up to 50cm long) and, with their surprising agility and sheer heft, are not to be messed with.

People see hippos yawn with their mouths wide open and think of them as being calm and lazy. Wrong! A hippo yawn is a sign that they are being aggressive.

Hippos can make a laughing sound. Again, not a good sign. The hippo is NOT amused, but rather annoyed, and a mad hippo is a dangerous hippo. 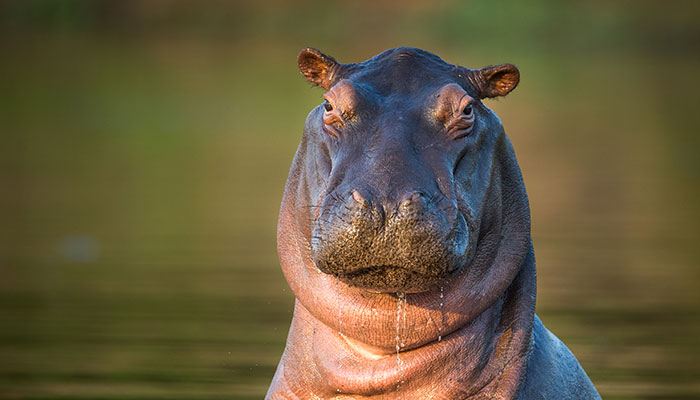 In the Okavango Delta, hippos help alter the landscape that benefits other animals. Their regular pathways out of the water to graze stay filled with water during the dry season and offer other animals watering holes. These water-filled pathways also offer a safe space for smaller fish and aquatic animals to escape from bigger predators in deeper water.

If a water source dries up or there is a shortage of grazing, hippos will migrate to find a new home as far as 40–50 km away. While male hippos are territorial, but only for mating rights, grazing areas are shared freely for all hippos living in a particular area.

Hippo sex ­– the birds and the bees…

Hippos are polygamous – the males mating with more than one female each season. This doesn’t happen that often – a females doesn’t ovulate for 17 months after she has mated and conceived. So basically, sex happens about once every two years. To find out if a female is ready and willing, a male will sniff her urine or behind. 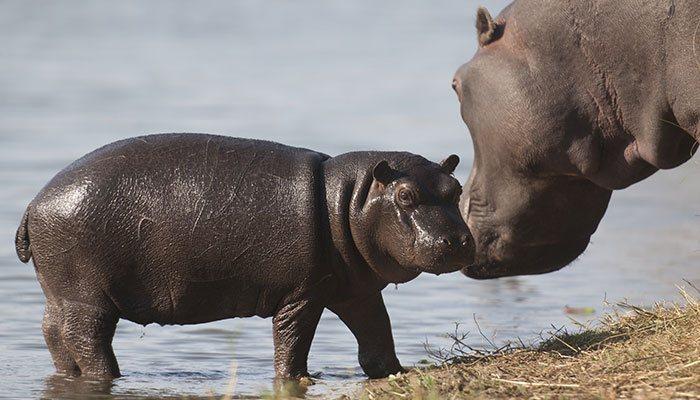 The dominant male will be around the herd of females most of the time, following them constantly. This is a time when ferocious fights can break out among the males. The ‘courtship’ ritual is not very romantic by any standard! A male wanting to mate with a lady hippo will pee and poo simultaneously, then use his tail in a whirring motion to spread/fling this concoction in her direction to get her attention.

Hippos are the only land animals that mate in water. The female is forcibly submerged under the water during mating and only occasionally comes up to breathe – luckily they are good swimmers and can hold their breath for up to five minutes underwater.

After a gestation period of about 8 months, the mother gives birth to a calf (sometimes twins) in the water. This helps ease the birth process and also protects the newborn from land predators like crocodiles, hyenas and lions. She isolates herself from the herd for about two weeks until her calf has ‘imprinted’ (recognizes her as its mother), then joins them again.

Hippos as a species are classed as ‘vulnerable’, a classification which is not as significant as ‘endangered’, but their numbers have dramatically decreased over the years. At this rate, it is estimated that hippos could become extinct within the next 100 years. 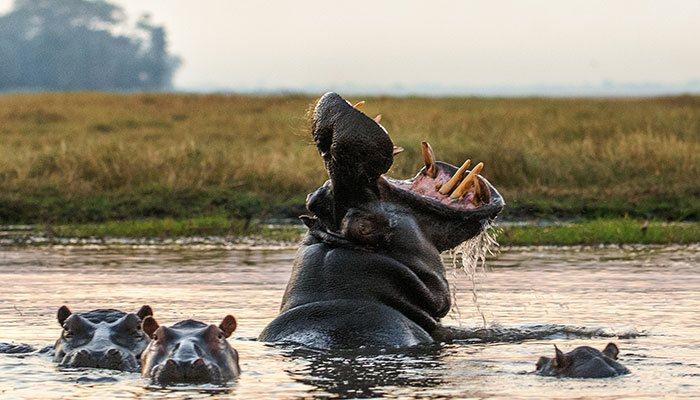 The main cause for this is habitat loss due to human encroachment on wild areas, and poaching them for meat and their teeth, which are made of ivory – the same as elephant tusks. The international ban on elephant ivory in 1989 caused a huge spike in hippo poaching. To date, hippos do not have the same legal protections as elephants and rhino (although that has not stopped the poaching of either!).

The Incedible Journey: the story of Huberta – South Africa’s most famous hippo

Spoiler alert: this tale does not have a happy Hollywood ending…

In November 1928, a hippo from the St Lucia region decided to go on a remarkable journey that that spanned 1 600 km and took over 3 years. She soon became famous all over South Africa and the world. The hippo was named Hubert (changed to Huberta posthumously, as she turned out to be a lady hippo). 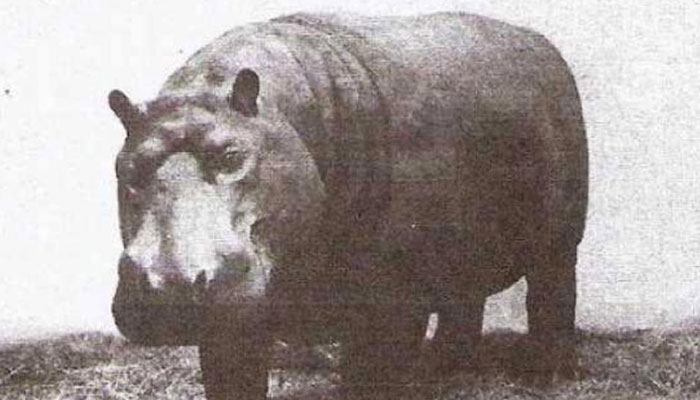 Why this hippo set out on an unprecedented odyssey remains a mystery, but perhaps she yearned to return to some ancestral homeland further south. First, she stopped off in the Mhlanga River about 200 km south of her home turf for a while, and by that time had become something of a celebrity. She moved on, crossing roads, railways and passing through towns at night, mostly evading the prying eyes of journalists and other interested people.

Her newfound fame caused her to be declared ‘royal game’, meaning it was illegal to hunt or try to catch her. Some Zulu and Xhosa people believed that she embodied the spirit of a great chief.

Next, Huberta headed south to Durban where she was spotted walking along a beach and taking a dip in the ocean. She trampled over a fancy golf course and attended a party at the Durban Country Club, clumping over the verandah to the amazement of partygoers.

Huberta finally reached East London in March 1931, having crossed more than 120 rivers with some rest stops along the way. It would have been fitting for this adventurous hippo to finally settle down to a leisurely life, happily wallowing in a river with only animal lovers coming to visit and admire her. But just one month later, three hunting farmers shot and killed her while she basked in the Keiskamma River. The public outcry was huge, but the killers got away with a mere fine of £25 each.

Fiona’s claim to fame is that she was the first hippo to be born (in 2017) at the Cincinnati Zoo in 75 years. She was also the first of her species to be seen in the womb using an ultrasound scan. The staff at the zoo named the baby Fiona, as her cute little ears reminded them of the ears of Shrek’s delightful love interest in the animated movie. 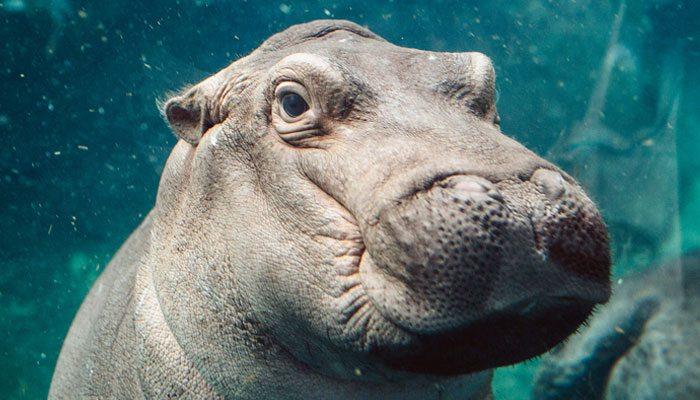 Fiona was born six weeks prematurely, weighing only 13 kg; the norm for the species at birth is 25–54 kg. She couldn’t stand on her own to feed as she was too weak and needed to be bottle-fed with milk from her mother and infant formula supplements. Today she is a healthy 3-year-old.