The Weird and Wonderful World of the Honey Badger

Out in the African bush, visitors on safari tend to be focused on the Big Five ­– elephant, rhino, lion, leopard and buffalo. The ‘Big Five’ was a term originally coined by big game hunters, but now more common among tourists who only aim to shoot them with cameras. However, there are so many more animals that are extraordinary in their own way. One of these lesser-known but super-interesting animals for sure is the honey badger. These creatures have some extraordinary physical and character traits that have allowed them to survive and thrive in very different natural habitats, extending from sub-Saharan Africa, as well as the Middle East and India. Here are 10 facts about honey badgers. 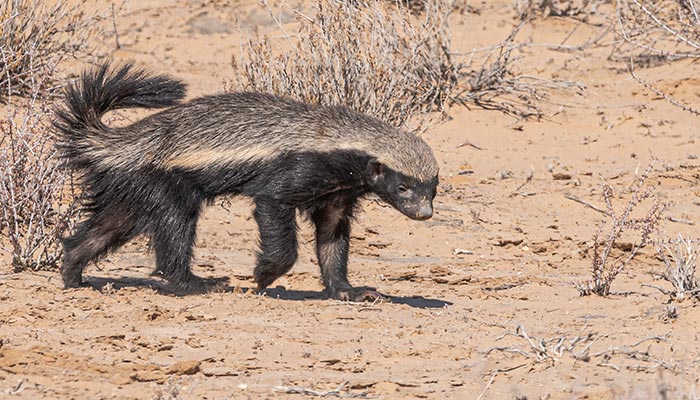 While its black and white colouring might make the honey badger resemble the European badger, they are more closely related to a wolverine, weasel or skunk (more about the latter later). Mellivora capensis is the species’ Latin name, which means “honey eater of the cape.” In Afrikaans a honey badger is called a ‘ratel’ which probably comes from Dutch ’raat’ meaning honeycomb. ‘Ratel’ also means rattle in Afrikaans and they produce a rattle-roar sound when about to defend themselves or attack. They are relatively small, the size of a small to medium dog, and weigh up to 13 kg. They are low slung and will be well below a human adult’s knee. But boy, are they ferocious! (More about that later.)

(2) They love honey, but also eat pretty much anything else 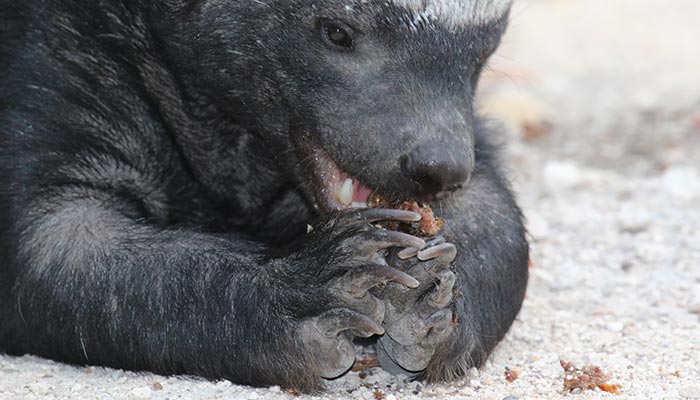 The honey badger loves honey ­– actually it’s more interested in the honeybee larvae in the honeycombs. It has a remarkably thick skin, which helps when clawing open a beehive guarded by angry bees. As it feasts on the larvae, it is constantly stung by an army of bees, and seems to have good resistance to bee venom. However, dead honey badgers are sometimes found near beehives. These fearless omnivores will also kill and eat venomous snakes (25% of their diet) and seem to have some resistance to snake venom and can sleep off an otherwise lethal bite. Mammals, birds, reptiles, insects, larvae, plants, fruit, eggs, and roots are also on the menu for honey badgers. 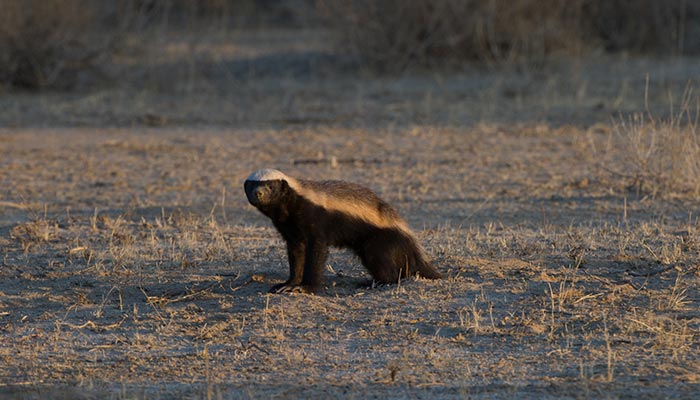 “Hulle skrik vir niks” is an Afrikaans phrase meaning ‘they are scared of nothing’, and the honey badger is the epitome of this sentiment. They will fight off a lion or a pack of hyenas if they have to, and are often successful. Not only is the honey badger’s skin exceptionally thick – 6mm – as thick as a buffalo’s 20 times their size, bur also extremely loose, like a person who should wear a size medium coat, actually buys an extra large coat. If the honey badger is attacked, and the opponent bites down on the skin and fur, often that’s all it gets ­– the badger can twist its body in its oversize skin and flee with just a chunk of skin missing, or fight back, using its formidable 4 cm claws or sharp teeth that can crack a tortoise shell.

(4) Honey badgers have another secret weapon 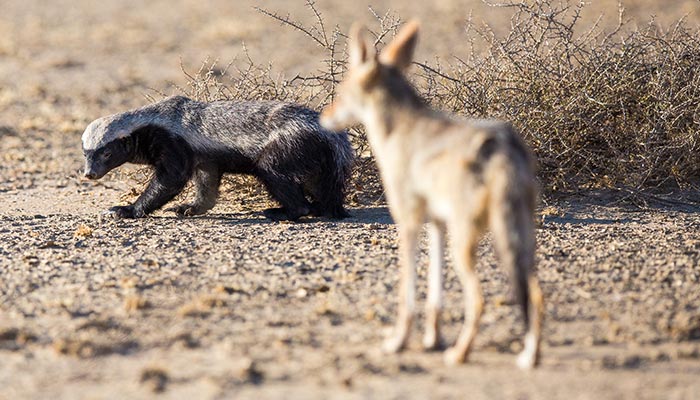 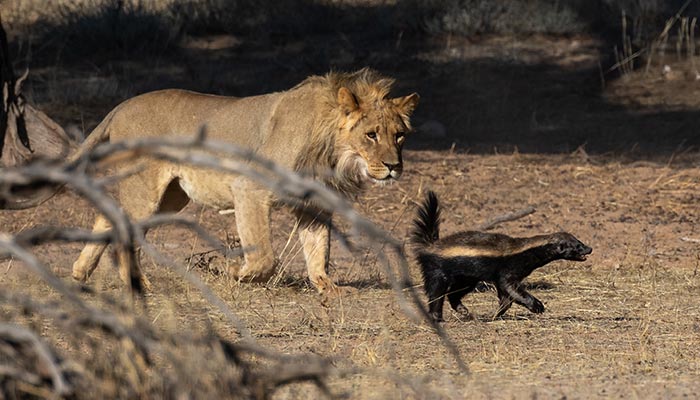 This next bit of info may make some readers rather squeamish to say the least. It must be said that, like most animals, honey badgers prefer to avoid a confrontation, but if cornered, their fur will stand on end, they will emit a loud ratttle, drop  a stink bomb and charge! Their main enemies arehyenas, leopards, lions and pythons. It has been known that in a fight (and in the wild it is often life or death) honey badgers go for anything dangling they can easily reach, most especially between the legs. This has been witnessed many times. and makes for a good campfire tale in the African bush when the conversation gets ‘down and dirty’. After the castration of its prey, the honey badger will potentially wait for their victim to bleed out before commencement of the feast. Ouch! 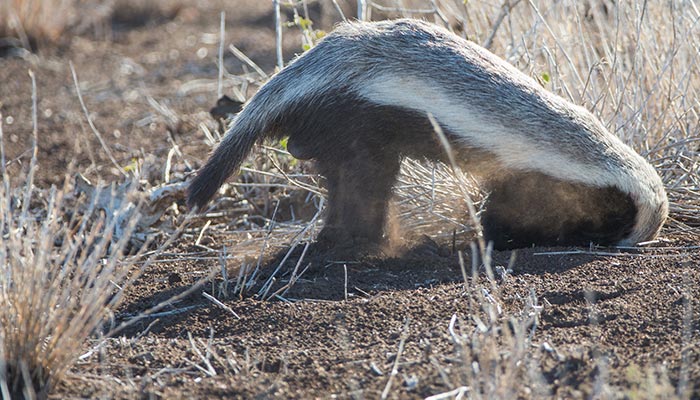 Honey badgers don’t have anything like a permanent home. During the day that may dig themselves a burrow to rest in, in the ground, in a tree trunk or termite nest. If they need to hide from predators, they can dig themselves a hole to hide in in a few minutes. Of course they are built for digging, with their 4 cm long claws, so they can also dig out their next meal from prey who live underground. 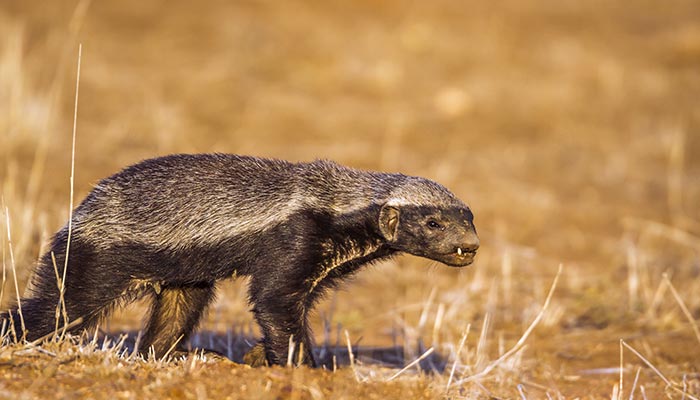 Probably not a welcome guest, honey badgers will make themselves at home in someone else’s spot if they’re feeling to lazy to make their own. Aardvarks, hares, mongooses … makes no difference to the not very fussy honey badger ­– a hole is a hole, a burrow is a burrow, too bad for the current resident. 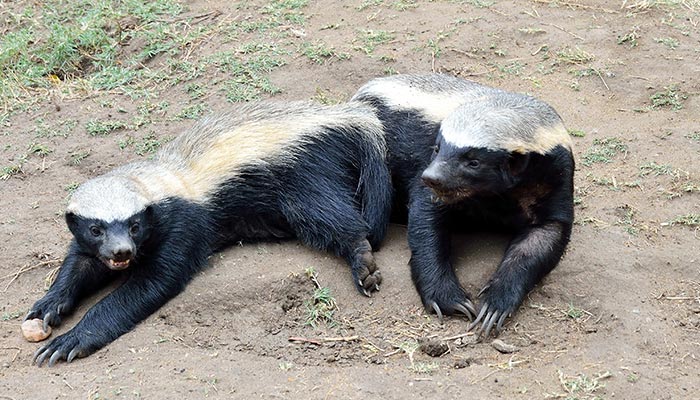 Having read about these creatures so far, it’s little wonder that they spend their time alone! They do join up with a female to mate, and sometimes they do bond with a particular female and stick together. A kit born to the mother is fully adult size by six months old but may stay with mom up to two years until it has learnt all the hunting and survival skills it needs. 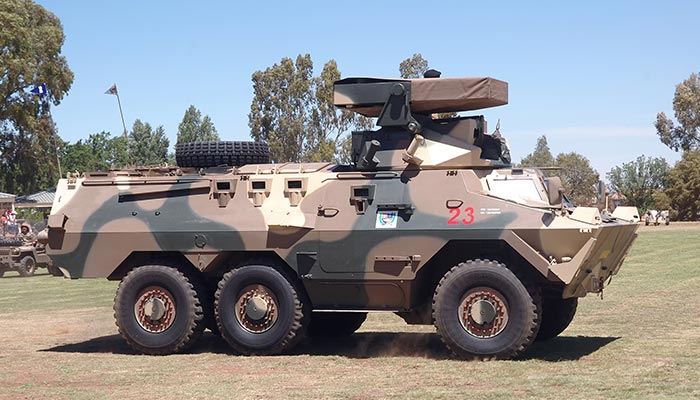 Honey badgers have an infantry fighting vehicle named after them ­– the Ratel. Designed to be light and manoeuvrable in bush warfare situations, we can suppose it was a fitting name. Production of the Ratel ceased in 1987.

It’s not often one finds intelligence coupled with mean, ferocious, ‘street-fighting’ tendencies, either in the animal kingdom, or in humans either. But honey badgers have unusually large brains and know how to use them. They are among the very few non-primates that use tools to achieve a goal. Nowhere has that been more evident than in the world’s most famous honey badger, Stoffel.

Stoffel was hand-raised from a young age by a farmer in the area where he caused trouble every day. He was brought to the Moholoholo Rehabilitation Centre about 18 years ago where he was allowed to roam free with the other two female honey badgers at the centre. Stoffel stayed because humans had imprinted on him at such a young age, but he caused havoc in the rehab centre – killing small buck, and even an adult tawny eagle. He also terrorised kitchen staff in a nearby lodge, chasing them outside and helping himself to all the food at hand. So an enclosure was built for this much-loved but impossible to control animal. It soon became apparent that he used all means to escape, digging up stones and piling them up in a corner ro climb up and out, ußsing a rake left in his enclosure to do the same thing, and even shaping mud into balls and piling them up in a corner. You just can’t can’t keep a naughty honey badger down!