Eyes Glowing in the Night: Meet the Fascinating Nocturnal Animals of South Africa

The glorious mechanisms of nature rarely cease to amaze our curious minds, especially if we focus on the African regions where a special kind of animal kingdom still reigns supreme. In this article, we’ll share some research about the animal behaviour of nocturnality and meet some of the most interesting species that have adapted to the African nightlife. It’s possible to spot these creatures if you go on a safari night-drive, as they are very elusive animals who choose to leave their daytime retreats hours after the sun goes down.

As many other characteristics seen in animals, being nocturnal is a form of adaptation. Some species developed nocturnal affinities to avoid diurnal predators, and others are nocturnal to be better predators themselves. Both these categories share unique traits: highly developed senses of hearing, smell, and specially adapted eyesight. Onlookers often get nothing more than short glimpses of nocturnal animals in South Africa, so here’s a bit more about them.

Pangolin – Both Animal and Ball 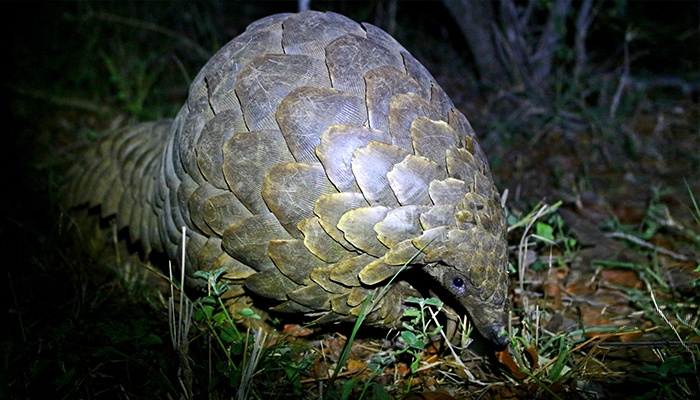 Pangolins are rare and endangered. These armoured knights fight termites with their long and sticky tongue and they curl up into a protective ball when threatened. Although it may sound like a cowardly thing to do, their razor-sharp brown scales are known to do some damage. Pangolins have long claws and a slender snout, and once you think about they are quite bizarre-looking. The savannah woodlands resident inhabits the northern parts of South Africa

Bushbaby – All Eyes and Ears 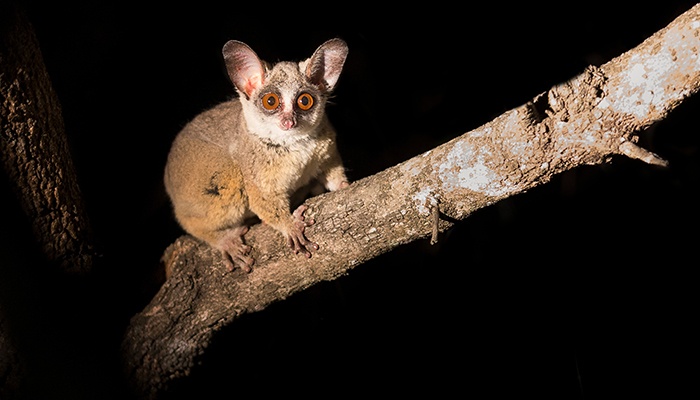 All the species of these tiny primates are nocturnal. In Afrikaans they call them “galagos” or “nagapies”, which translates to “little night monkeys". Bushbabies are characteristic for their oversized eyes and large ears which make them well adapted for being active in the darkness. They are also exceptionally agile and can jump long distances between trees with great ease. If you don’t ever see a buishbaby in the South African wild, you will most certainly hear it, as they are known to let out eerie calls, like a crying baby would. 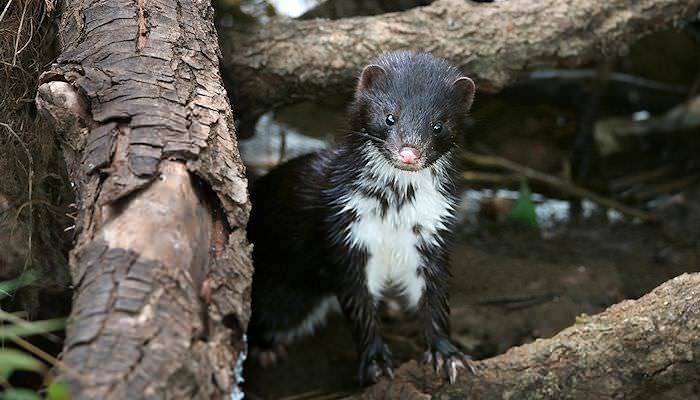 Also referred to as the African polecat, zoril, zorille, zorilla, Cape polecat and African skunk, the stripped polecat is black on the underside, white on the tail and has stripes running from its head down its back. This little carnivorous critter is a solitary creature which can be aggressive and territorial. To mark its territory, the African skunk will spray it with an unpleasant odour and get rid of predators without having to engage in close combat.

Cape Porcupine – An Example of An Effective Defence System 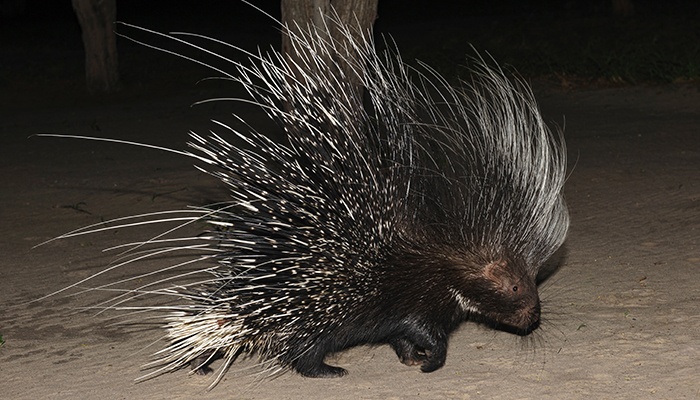 Cape porcupines are the largest rodents in Africa and the world's largest porcupines, measuring up to 1 meter in length from snout to tail-tip. They have stubby bodies covered in long spines up to 50 centimetres in length, short limbs, and an inconspicuous tail. The spines on their backs are hollow, and porcupines rattle them to warn an opponent that he is about to get pierced. Cape porcupines feed upon roots, fruit, bark and cultivated crops. Despite rumours, they do not shoot its quills out in defence, but they might get stuck in anything that touches them. No touchy! 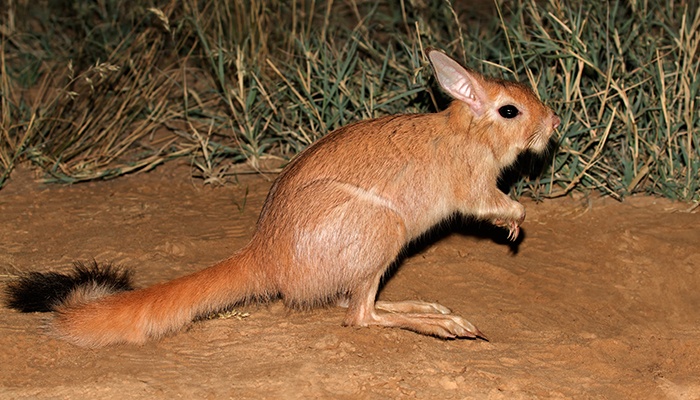 These rodents are commonly spotted on night safaris in Southern Africa. Like some sort of a miniature kangaroo, the springhares have a long tail, short front legs and extended hind legs. Their ability to leap over 2m in a single bound is what gives them the name. The black tip on the tail is always present, whereas their body colour can go from reddish-brown to pale grey. Although they are not related to hares at all, they are hunted as such, and eaten in multiple African regions. 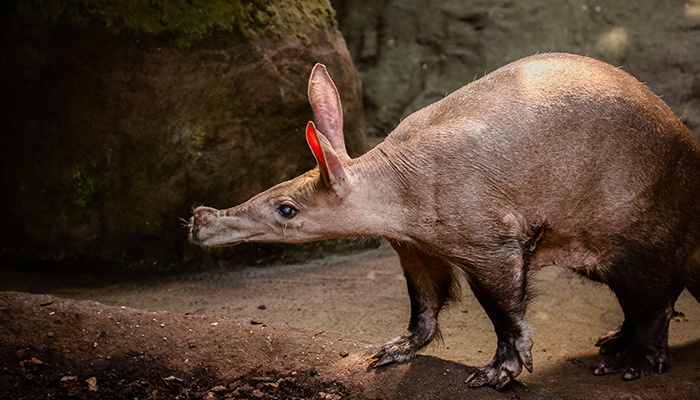 Apart from having weird name, the aardvark also looks weird. Its name was derived from the Afrikaans expression for “earth pig”. The creature sports a long snout with large ears that stand straight up. It has a humped back and handy claws for expert digging. Aardvarks feast on termites at night, and during the day they shelter from the sun in deep burrows. Adults are known devour as many as 50,000 termites in a single night. When you spot an aardvark in a nightly safari ride, make sure not to interrupt its dinner. 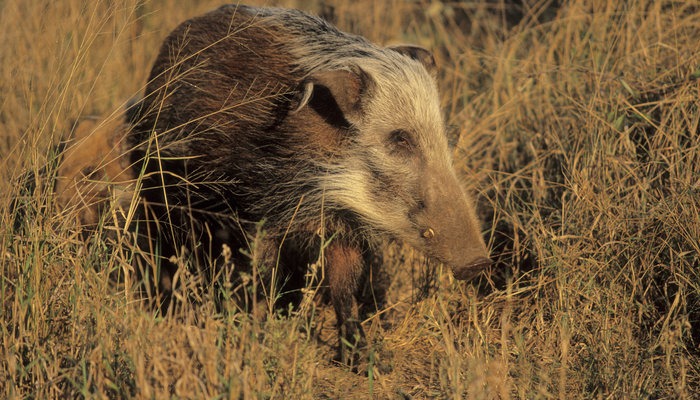 Although they may spend some time active during the day, bushpigs are predominantly nocturnal. They like dense habitats and live in groups run by an alpha male and a dominant female. Their population is regulated by hunting, but continues to thrive because of the abundance of food and the lack of predators that would endanger them. Bushpigs are territorial and lazy. They are known to follow fruit-eating monkeys to feast of their uneaten fruits. In the eyes of South African agriculture, bushpigs are a major nuisance due to their destructive foraging habits. 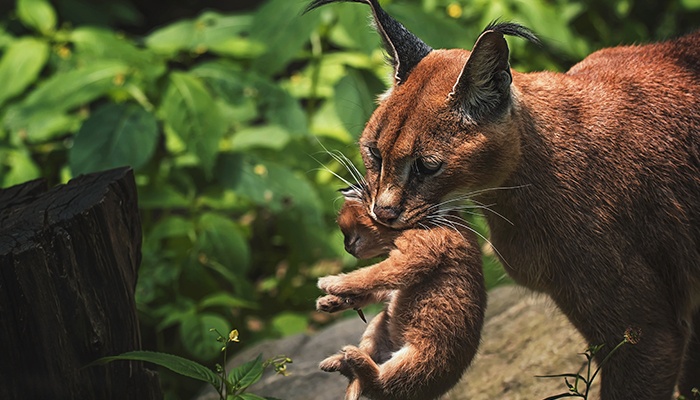 A striking, middle-sized wild cat, the caracal is characterised by a robust body and agile physique, long legs, a short face and - long tufted ears. The backs of caracal’s ears are black and topped with long black tufts and really stand out against a short, dense coat coloured tawny-brown to brick-red. This is a secretive cat and very difficult to observe. It lives either alone or in pairs and is capable of leaping high into the air and knocking down a dozen birds at one time.

Aardwolf – Wrongly Judged for Its Looks 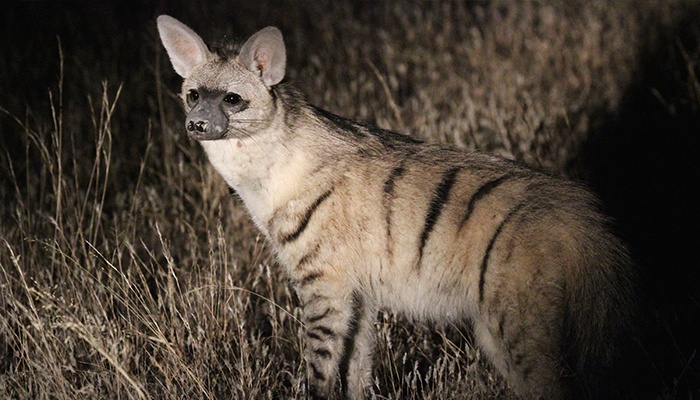 To some extent, the aardwolf is wolf-like, but it actually belongs to the same family as the hyena. Its thick mane rises to make the animal seem bigger to its opponent when threatened. This defence mechanism is accompanied by the excretion of a foul-smelling liquid, skunk-style. Aardwolves feed mostly on termites, using their sticky tongue, but since they look like predators of livestock people often kill them. These animals are easily recognised for their black stripes on yellow fur, and even though they are not fast, they can survive by being crafty.

African Civet – A Valuable Supplier For The Perfume And Coffee Industries

Active only for a few hours before midnight, African civets can be quite rare to spot. All members of the species have a black mask around their eyes that resembles that of a raccoon. Its attractive coat provides good camouflage and a good defence mechanism when it fluffs up. Civet musk is used in the perfume industry – the smell is unpleasant at first, but when diluted it becomes a pleasant scent. Civet secretions are also involved in the production of expensive coffee.