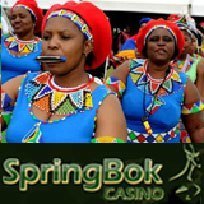 Players are invited to compete for top position in the R5,000 Braai-roll Slots Tournament that begins this week. They have until September 30th to score top points and win a share of the R5,000 prize pool.  The tournament will be played on the popular T-Rex slot game.  This special tournament is listed with dozens of other regular tournaments under the ‘Tournaments’ tab in the casino software.

Between 10 am and noon on September 12th, 19th and 26th Springbok customer service reps will be continuously and randomly rewarding players with various free spin bonuses and contacting them through the message center. Although players just have to log on to qualify and don’t have to play to win, game-play boosts their chances of being rewarded with free spins.

September 24th is Heritage Day, a national holiday in South Africa honoring the cultural heritage of the many cultures that make up the country’s population.  Details of a special Heritage Day Bonus available that day will be published on the Springbok Casino website.

First-time visitors to Springbok Casino can get a Welcome Bonus of up to R11,500 by using coupon code “SPRINGBOK100” on their first deposit and up to R5,000 on second and third deposits. On the 7th of every month, the first 77 players to request the Lucky 7th bonus (using coupon code LUCKY7-0913 on September 7th) will receive a 100% bonus.

Popular with players from Joburg to Capetown, Springbok Casino offers more than 200 online casino games including table games like Texas Hold ‘em Poker and several versions of Roulette, as well as amazing slots like the feature-packed new Spirit of the Inca. Some of Springbok’s best slots are also available for iPhone and iPad users.