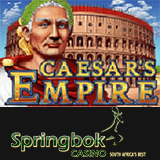 May 5, 2014 – South Africa (Press Release) – The Roman-themed Caesar's Empire slot game is Springbok Casino's Game of the Month for May. Players at the deluxe South African online casino are receiving free spins, free money and double comp points as they take a spin through ancient times.

"Caesar's Empire was one of the most popular games in April, alongside the new Lucky 8 and the even newer Shark School," said Springbok manager Daniel.  "Cleopatra's Gold was the GoM in April so we thought we'd stick with ancient times. Also with the movie Pompeii coming out we were thinking Roman' so this was the obvious choice for this month!"

Caesar's Empire is a five reel, 20 payline slot game from Realtime Gaming (RTG).   The Caesar Coin symbol is wild and triples the pay out. On a R20 bet, 5 Cleopatra symbols wins the jackpot of R2500. Five Cleopatras during free spins wins R5000 on a R9 bet.

Ten free spins are triggered when a Coliseum appears on reel five and one or more Caesar symbols appear anywhere else. All Coliseum symbols change to Caesars or Cleopatras during free games and every Caesar awards up to five extra games.

"Sometimes it seems like you're playing on free spins forever!" said one regular player.

These bonuses are available until May 31, 2014 only. To claim them players simply enter the bonus codes as they make a deposit.

Springbok Casino offers more than 350 online casino games and ten of its most popular slots are also available for iPhone, iPad and Samsung Galaxy S3/S4 users.