Each year on 22nd September people from everywhere celebrate this iconic animal. As every rhino species experiences dwindling numbers, while the human population grows, their conservation is more urgent than ever. The plains of Africa would be the poorer without these mega-herbivores. They are considered a ‘keystone species’, which help maintain grasslands through grazing and their presence in numbers has shown to support a greater diversity of plants and animals.

In honour of the mighty rhino, we’ve compiled some fascinating facts as well as some of the grim realities faced by these truly remarkable animals.

The shrinking world of the rhinoceros

The mighty rhinoceros has existed in some form or another for 50 million years, and were at one stage the largest land mammal on the planet, now overtaken by the elephant. If they appear rather prehistoric, that’s because they are! 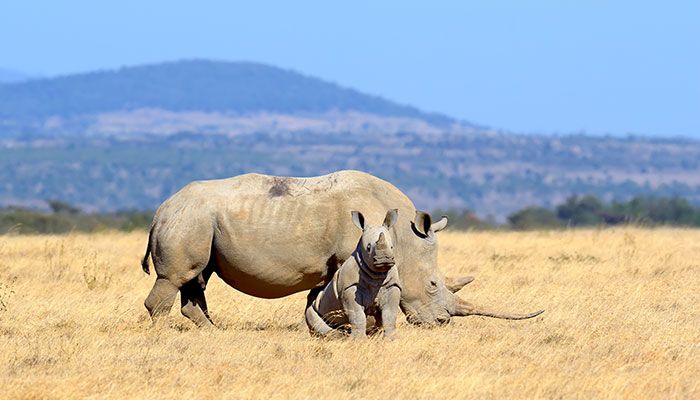 A recent ancestor is the woolly rhinoceros that lived during the Ice Age (from about 2.6 million years ago up to 11,700 years ago) and ranged across Europe and Asia. Its closest modern relative is the Sumatran rhino. Today, there are five species of rhino in existence: the Indian, Javan and Sumatran rhino in Asia and black and white rhinos in Africa.

Just as the demise of the woolly rhinoceros (and the woolly mammoth) was partly caused by humans hunting them to extinction, we’ve recently witnessed the extinction of at least one subspecies (the West African black rhino) with others on the critically endangered list due to hunting, poaching for their horns and habitat loss.

At the turn of the 20th century an estimated 500,000 rhino existed in Africa and Asia. Today, only about 60 Javan rhinos remain, and in Africa under 5,000 black rhino and just over 20,000 white rhino survive in the wild.

Ensuring a future for these ancient and magnificent creatures through stringent conservation measures remains a top priority – we certainly can’t afford to lose one of our ‘Big Five’.

The two species found in South Africa are the Southern black rhino and the Southern white rhino. There are differences, but colour isn’t one of them – they are both a similar shade of grey! 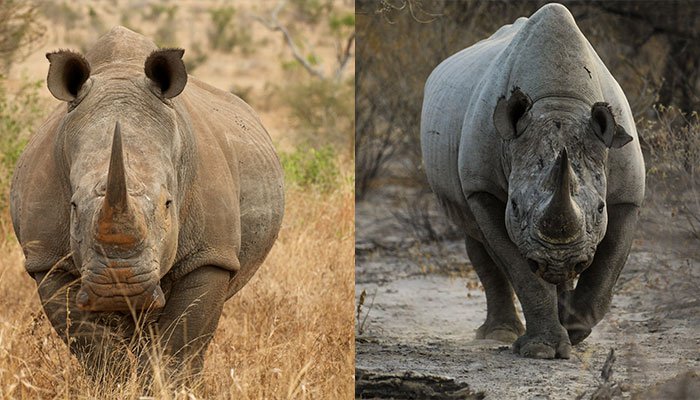 These anatomical differences are key to what rhinos eat: the black rhino uses its long, flexible upper lip to strip leaves and twigs from trees and shrubs, although it can also graze on grass, while the white rhino’s mouth is mostly suited to cropping grass. These vegetarian heavyweights need to eat at least 50kg of food a day.

The black rhino is quite a bit smaller than the white rhino, weighing up to 1400 kg. By contrast, a male white rhino can tip the scales at 2300 kg. Compared to the weight of, say, a Mercedes Class A ­– about 1400 kg, the white rhino is truly a massive beast, second only to an elephant. As big and lumbering as rhinos are, they are also surprisingly fast and can charge up to 48 km per hour – faster than a 100m sprinter and over longer distances!

Another difference between these species is temperament ­– black rhinos are mostly solitary and considered more aggressive than white rhinos, especially if they have a calf.  White rhinos are a tad more sociable and sometimes move around in groups (a group of rhino is appropriately called a ‘crash’).

I may not be able to see you, but I can smell you!

All rhinos have poor eyesight but a very keen sense of hearing and smell. Rhino dung and urine are important social indicators, rather like posting on a message board. Rhinos smell each other’s droppings and urine to ‘see’ who’s around and can tell the sex and age of the ‘poster’ and, if it’s a female, whether she’s ready to mate. 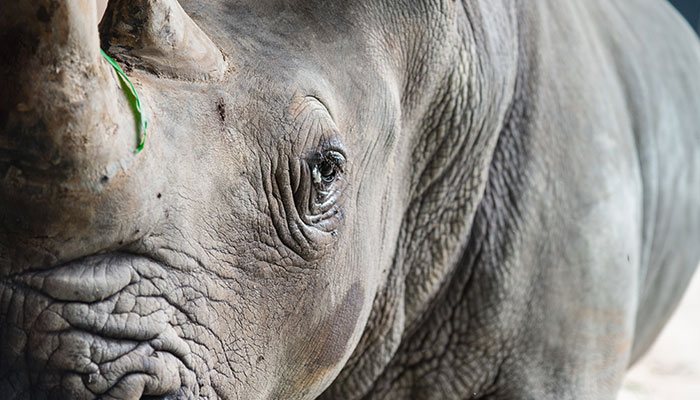 Rhinos can also pick up unfamiliar scents in their environment, such as a human, and if they feel threatened are known to charge game vehicles, with some uncomfortably close encounters. With their limited vision, they have occasionally been witnessed charging at large rocks and other inanimate objects.

Rhinos also vocalize to communicate with each other – snorts signal anger, and their repertoire includes grunts, trumpets and squeaks. Rhinos can also communicate ‘silently’ – with low frequency sounds inaudible to a human’s ears.

The Myth of Rhino Horn

Why is rhino horn in such demand that it has led to the decimation of rhino populations and even the extinction of some species? What is so special about rhino horn? Well, the short answer is: nothing. Rhino horns are made of keratin, the same stuff that our own hair and fingernails are composed of. 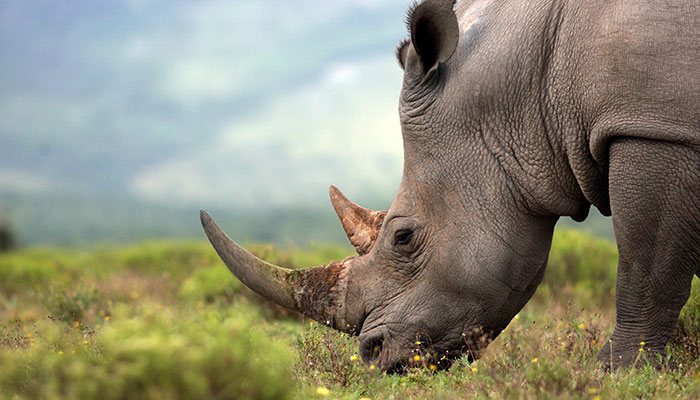 Despite scientific research that finds no medical benefit at all in its use, powdered rhino horn has been used for over 2,000 years in traditional Chinese medicine to treat everything from headaches to cancer. And in spite of international tradein horn being a criminal offence with heavy fines and long prison sentences, there are always willing killers, middlemen and buyers.

Rhino horn sells on the black market for up to $60,000 per kg – much more expensive than gold or even cocaine. In Vietnam, wealthy people buy it purely for the social prestige of being able to afford this ‘luxury’.

With such a high price on rhinos’ heads, conservationists have a real battle on their hands protecting these magnificent creatures.

Living in an undisclosed location on a conservancy in Kenya, Najin and Fatu (a mother and daughter) are under armed guard 24/7. These precious animals stand between the subspecies’ survival or complete extinction.

Translocated from a zoo in the Czech Republic, together with two males, Suni and Sudan, it was hoped that these rhino would more easily breed in Africa and their offspring could be introduced back into the wild. Sadly, both females were found to be unable to carry full-term pregnancies, and both males subsequently died of natural causes. 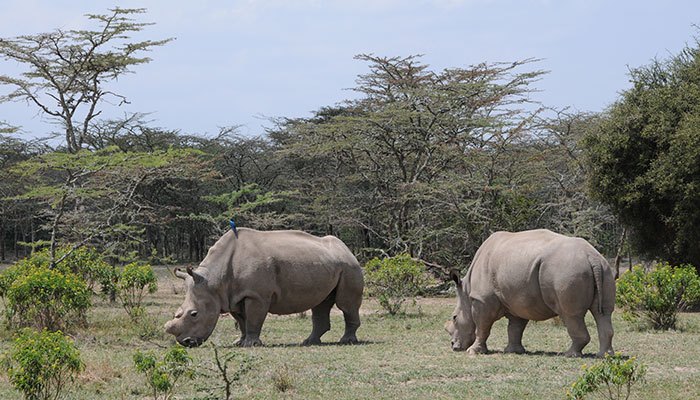 However, there is still a glimmer of hope – scientists extracted eggs from the females and, using sperm frozen from Suni, succeeded in creating viable embryos. These have been stored in liguid nitrogen and the plan is to implant these into a surrogate mother – probably a southern white rhino.

Beware of the Black Mambas

Well, these ones are only dangerous to would-be poachers. The Black Mambas is South Africa’s first all-woman anti-poaching group, started in 2013 by Craig Spencer, head warden at Balule Nature Reserve. This area, bordering on the Kruger National Park, has been one of the hardest hit by rhino poachers, many of whom are recruited from the surrounding communities. 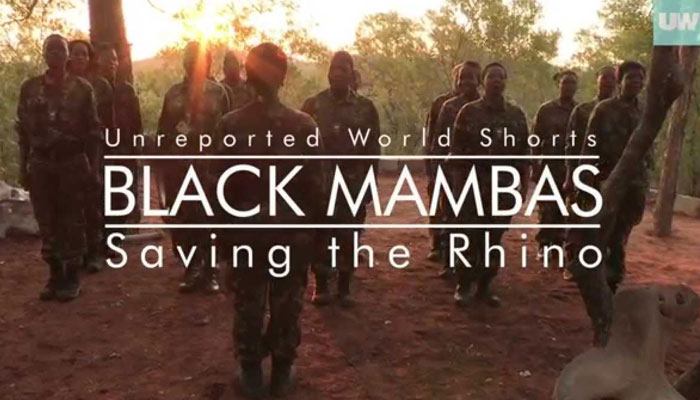 The highly-trained Black Mambas patrol border fences on foot, up to 20 km per day, and are unarmed! Their visible presence and their recognizable uniforms are the main deterrent to poaching gangs and they can quickly call on armed rangers when they detect any poaching activity.

The Mambas also find and remove wire snares, which poachers set to catch smaller animals for ‘bush meat’. These poachers often progress to poaching endangered species such as rhinos, so stopping them in their tracks at an early stage is an important intervention.

The formation of this group has had many positive outcomes, besides the remarkable reduction in poaching of over 63% since their inception. It has empowered local women who have little access to work opportunities, making them role models for others; part of their job is also to educate children and adults in their communities about the benefits of conservation.

Baby rhinos stay with their mothers until they are about three years of age. While adults have no enemies (other than humans) young rhino are vulnerable to attacks from predators like big cats, hyenas and crocodiles.

Losing their mothers – most often through poaching – means near certain death for these young ones. A number of rhino orphanages exist in South Africa that rescue, rear and eventually release young rhino back into the wild when they are old enough to take care of themselves. With dwindling numbers of rhino due to rampant poaching, every life is precious. 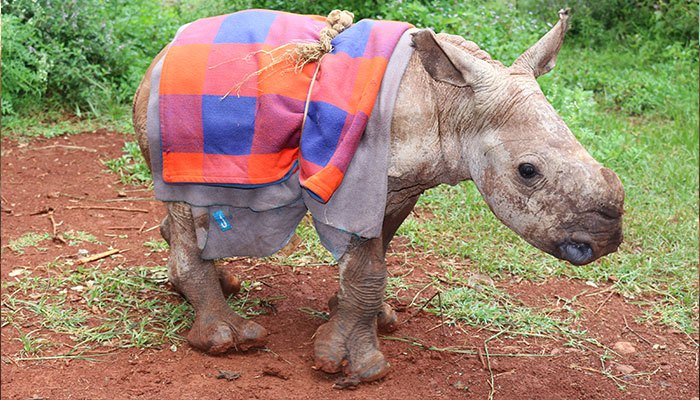 Rhino calves are usually traumatised when rescued, and often injured by poachers to keep them from their mothers while hacking off her horns. They are monitored 24/7, with keepers who act as their surrogate mothers. Because calves can ‘imprint’ on a particular human, keepers are rotated in case ‘their’ human cannot be with them. Newborns are fed special milk formula every three hours. At five months old they begin to browse on vegetation and don’t need milk feeding during night.

Like other young animals, baby rhinos are playful and need lots of stimulation and exercise to grow up strong and be able to negotiate their future life in the wild.

The Golden Rhinoceros of Mapungubwe

Arguably South Africa’s most famous rhino, and designated as a national treasure, the Golden Rhinoceros of Mapungubwe is a small wooden carving covered in a sheet of beaten gold. It was discovered by archaeologists in 1934, along with other gold objects, in a royal burial site near the northern border of what is now Limpopo province. 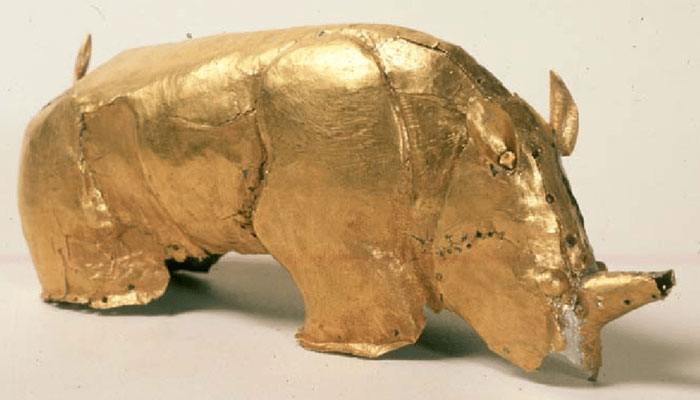 The artefacts date back to the 13th century and are indicative of a complex culture with a social hierarchy and wealth accumulation, with trade in ivory and gold as far afield as Zanzibar (2000 kms away). Other sites prove that Africans had settled in parts of South Africa at least 1000 years before Europeans set foot on African soil.

The symbolic significance of this little golden rhino lies its representation of wealth (made from gold) and power embodied by this mighty animal.