The Wild And Colourful History Of Slots 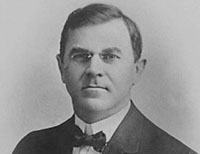 Above: Charles Fey - The father of the slot machine.

Slot machines have been around for over a hundred years. In fact, the first slot machine ever invented was called Liberty Bell and created by mechanic Charles Fey.

Charles Fey was a Bavarian immigrant who moved to San Francisco in 1885 to work as an instrument maker at a plow factory. Gambling was a hugely popular pastime in San Francisco and coin-operated gambling machines were already gaining popularity, but establishments never had an automated payout so they would often pay players’ winnings in the form of drinks or cigars. Fey was an imaginative inventor as well as a skilled mechanic, and he was taken with the idea of inventing a new kind of gambling machine – one that automatically rained money on the winners.

He opened his own business with a friend and got to inventing. His first machine, called the Horseshoe, was poorly received but the second, with the catchy name 4-11-44 was a huge success.

Slot machines as we know them today are based on Fey’s seminal invention, the Liberty Bell. This was a three-reel online slot machine with a staggered stop and automated payout design. The reels were painted with ten different icons: diamonds, hearts, and horseshoes were among the first slot symbols, and a cracked liberty bell represented the highest payout. 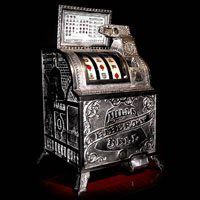 Above: The Liberty Bell

Fey rented them out to bars and shops in exchange for a 50/50 split on the machines’ profits. The Liberty Bells were so popular that his factory couldn’t produce them fast enough to meet demand.

There were many imitators of the Liberty Bell, including Fey’s old business partner T.F. Holtz who started his own competing company. Though they were in close competition, they remained friends. One of the Liberty Bell spin-offs (forgive the pun) was the Operator Bell, which was the first machine to offer those richly vintage fruit symbols that we associate so strongly with slots today.

Of course, the original slot machines were purely mechanical, relying on a series of gears that spun into action once the lever was pulled. Payouts were triggered by deeper notches in the winning symbols, which opened the automated coin dispenser.

The first electronic slot machine was created by the Fortune Coin Company in 1975 and was deeply distrusted because it seemed too easy to rig the outcome. That’s why many modern computerized slot machines still have the lever to pull that triggers the spin: of course, the lever has no influence on the outcome of the game, but it gives players a sense of agency, while the spin is actually controlled by a random number generator.