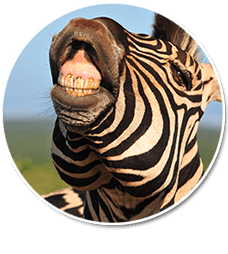 The animal kingdom is fascinating for a number of reasons, but on this occasion we would like to take a closer look (not too close, though) at some of the most powerful biters out there.

The teeth contribute to the ability to ensure survival for many animals, big and small, so let’s check out some interesting teeth facts for some of the most distinguished species on our precious planet.

Sharks are commonly seen as one of the most dangerous oceanic predators. Ever since Steven Spielberg’s “Jaws” came out in 1975, people can rarely get into the water and not look around for a monster shark emerging from the deep even if that’s the silliest notion and you’re just soaking in your bathtub. The great white shark has an exquisite set of seal-munching teeth that also show no mercy when encountered with fish, seagulls, penguins, squid, sea lions and various other aquatic creatures. Like all sharks, the great white’s both the top and bottom jaws move. They hold around 300 teeth, arranged in many rows, with the first two rows being used for grabbing and cutting the prey. 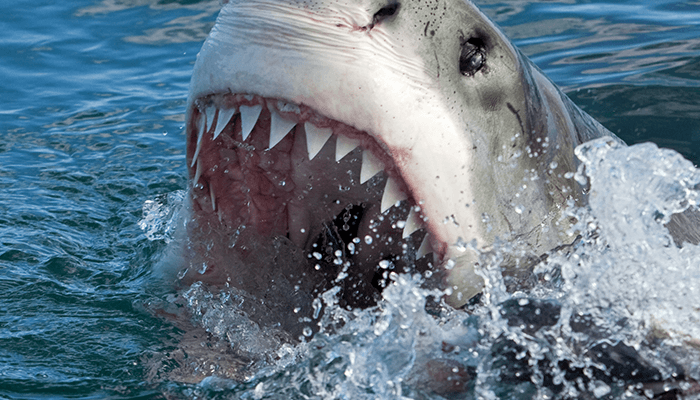 Shark teeth are triangle-shaped with jags on the edges. Since sharks continually lose their teeth over time, the developing teeth from the back rows will then rotate in and replace them. One can grow and use more than 20,000 teeth during its lifetime. Imagine making a shark smile for a photo – sheesh!

This large reptile looks menacing enough even without opening its mouth, but the sad trough is many crocodile species are endangered because of poaching. Typical carnivores, crocodiles have sharp teeth used for killing fish, birds and smaller mammals. They have powerful jaws that hold around 60 teeth which are hollow and allow for new ones to grow inside. Unlike humans, crocs do not clean their teeth to slow down wear and tear. They simply get rid of them, replacing them with new copies. A crocodile can go through over 3,000 teeth in its lifetime. 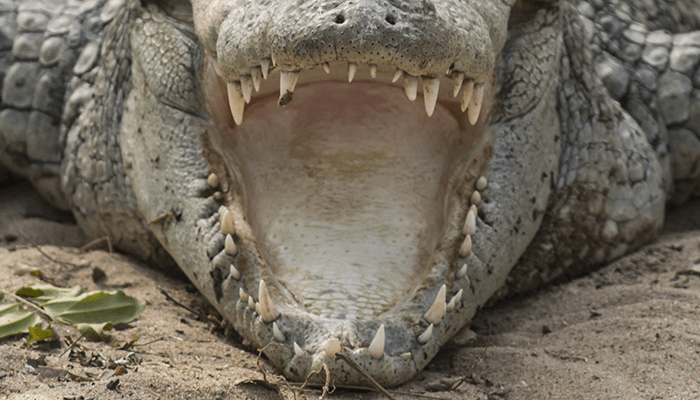 What’s curious about crocodiles is that they cannot chew. They will only tear apart flesh and swallow large chunks of meat and later swallow stones to help the food processing in their stomach. There is no denying that the crocodile has one of the strongest bites in the animal world. The reptilian giant has very strong muscles in charge of closing the jaw, much stronger than those which open the jaw. That’s why you may have seen how people keep their mouth closed with their bare hands.

Native to sub-Saharan Africa, the common hippo is a large semiaquatic mammal that mostly feeds on succulent grasses and fruits. Hippos have the same four types of teeth as humans: incisors, canines, premolars and molars. To see the importance of teeth in the life of a hippo we’ll have you know that they die of starvation when their molars have worn down too much to grind food! 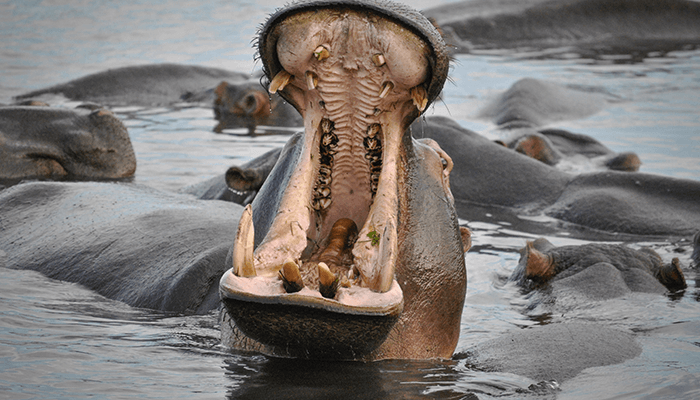 An adult hippopotamus has between 38 and 42 teeth. Most of them are positioned in the back while in the front hippos have sharp incisor teeth and canine tusks, used mostly for defence and display of dominance. Incisors and canines grow throughout a hippopotamus’s life. The front teeth can reach a length of 3 ft (1 m). The hippo’s mouth is huge and the animal can open its jaws at almost 180°. As for the bite force, is has been measured as 8,100 newtons (1,800 lbf) in adult females.

A lion is no pet cat - the King of Beasts, a lion is a fierce, strong and majestic animal. Armed with two large pairs of sharp canines, a lion intimidates everyone around it when it growls. Since it belongs to the family Felidae, the lion has a total of 30 teeth. They can be divided into three groups: incisors (the smallest teeth at the front of the mouth, used for gripping and tearing meat), canines (four largest teeth, can be up to 7cm long: used for ripping skin and tearing meat) and carnassial (the sharpest teeth at the back of the mouth, cut meat like scissors). 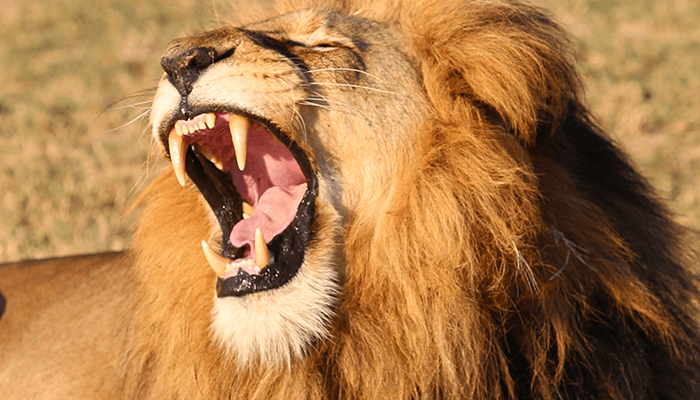 Lion’s jaws are extremely strong and their teeth are long and sharp. Since they are mammals, their teeth have a fixed arrangement and reach their final, adult form when the lion is around 1 year old. The lion’s bite generates around 1,000 psi (4,450 newtons). To kill their prey, lions use their powerful jaws to strangle it to death or snap the animal's neck. No wonder this big cat is one of the top predators in Africa.

Leopard may be the smallest of the big cats, but what it lacks in size the spotty feline makes up in camouflage and stealth. This animal is an accomplished hunter due to its sharp teeth and claws, strong jaws, powerful bodies and acute senses. Leopards have 32 teeth, 4 of which are long, pointed canine teeth. Canine teeth are used to kill prey, for biting and piercing. They can be about 2 inches (5 cm) long. 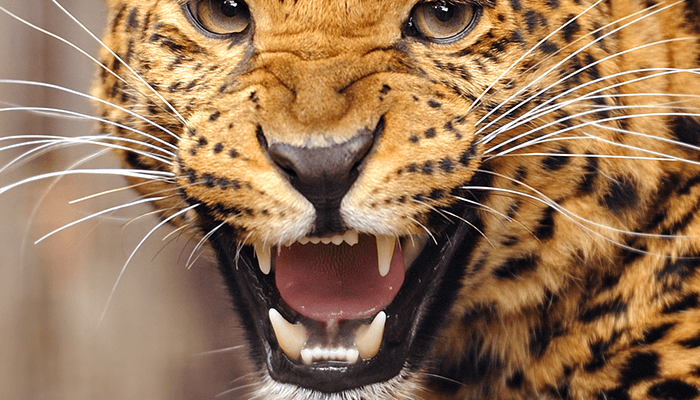 A tiger is ten times bigger than a leopard, and leopard’s fangs are just as big as a tiger’s. Leopards creep to within a few meters of their unsuspecting victim before lunging, using powerful jaw muscles, to exert a lethal hold. The skull shape provides incredibly powerful jaw muscles and allows the predator to suffocate the target with a bite to the neck. The strong jaws of a leopard also help the animal carry its prey up a tree, away from scavengers. Leopards are smart like that.

One of Africa's most feared snakes, the black mamba has been the subject of myths and legends across the continent. Exaggerations aside, black mambas are lethally venomous, highly aggressive snakes and you should stay out of their way. Found in South and East Africa’s savannahs, these long and feisty snakes have flexible jaws that they can dislocate in order to fit food up to four times the size of their head into their mouth. They have fixed, hollow fangs at the front of their mouths that they use to inject venom into their prey, like hypodermic needles. 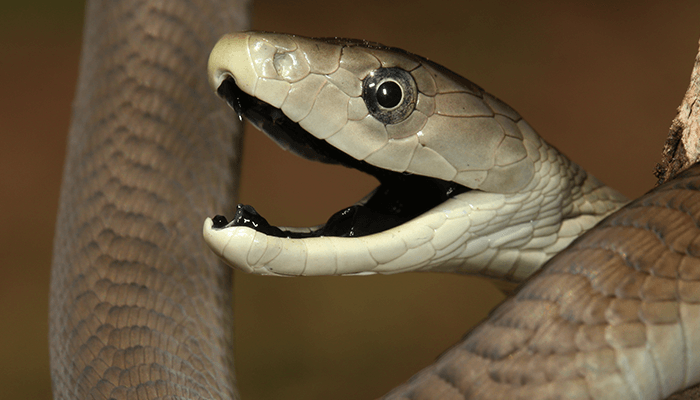 Mamba’s fangs can rock back and forth thanks to an "articulating maxillary bone", something that cobras and kraits do not have. This allows them to deliver bites with plenty of venom (there are rarely ever any dry bites). Just two drops of potent black mamba venom can kill a person. Black mambas have neurotoxic venom, which shuts down the nervous system and paralyzes victims. A mamba can have up to 20 drops in its fangs, which average 3-6mm in length in an adult snake.

Around 150 years ago, Africa’s savannahs were home to over a million black and white rhinos. The population declined due to poaching for their horns. Rhinos are grazers and they shape the African landscape by consuming large amounts of vegetation. Rhinos have between 24 and 34 teeth, depending on the species. Neither the black nor the white rhino has incisors. They have evolved to rely purely on their lips to pluck food, having lost their front biting teeth. White rhinos have square, broad mouths, with an upper lip and teeth that are very well adapted for grinding grass. Only the Indian and Sumatran rhinos have canine teeth, but all species have three premolars and three molars on each side of their upper and lower jaws. 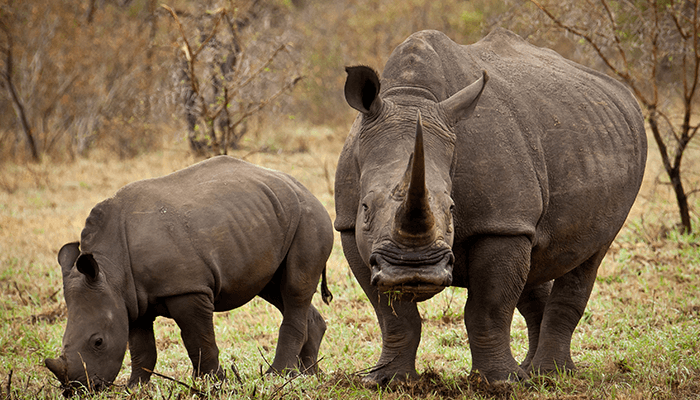 While you may think that rhino horns are the primary self-defence tool, some species will rather use their teeth in the heat of battle. The Indian rhino slashes and gouges viciously with the long, sharp incisors and canine teeth on its lower jaw to fight off an opponent.

Looking at elephants, one can only marvel how nature has affected different animals to develop different dentition so that they can process their food better. Well-known for their impressive tusks, elephants hide their other teeth inside their mouths and we rarely think about them. The pachyderm giants usually have 26 teeth: the incisors, which grow into tusks, 12 deciduous premolars and 12 molars. The tusks are used for digging up roots, peeling off tree bark and moving away vegetation or anything else that stands in the way. Elephants can be right- or left-tusked, just like humans are typically right- or left-handed. Their dominant tusk is also called the master tusk and it is shorter and more rounded because it is used more, therefore more worn down. African elephants, both male and female, have tusks around 300 cm (9 ft 10 in) long. 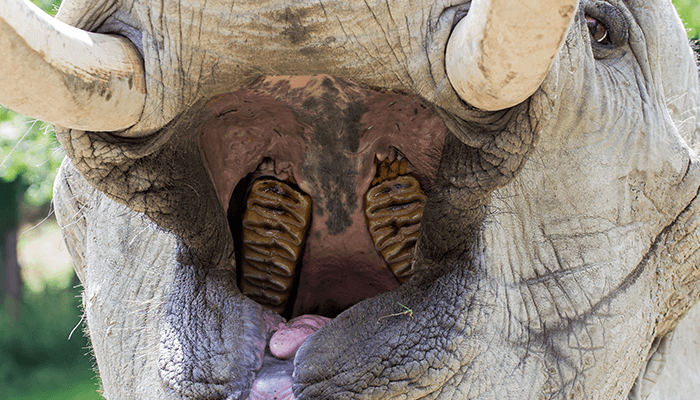 Elephants go through cycles of tooth rotation throughout their lives. During its lifetime, an elephant can replace its chewing teeth six times. Each time the teeth change, the new set is bigger. A single molar can be about 20cm long, and weigh around 4kg. Since these tuskers spend 16 to 22 hours a day feeding, it is imperative to have a good set of teeth.

Hyenas have a rather lousy reputation in popular culture. These are highly social animals, very smart and quite fierce. Far from dim-witted cowards, as they were presented in the “The Lion King”, hyenas are accomplished hunters and the second largest carnivore in Africa. The teeth and jaws of a hyena are so powerful that they will eat every inch of a carcass - including the bones – leaving behind only fur (and droppings of chalky white colour). 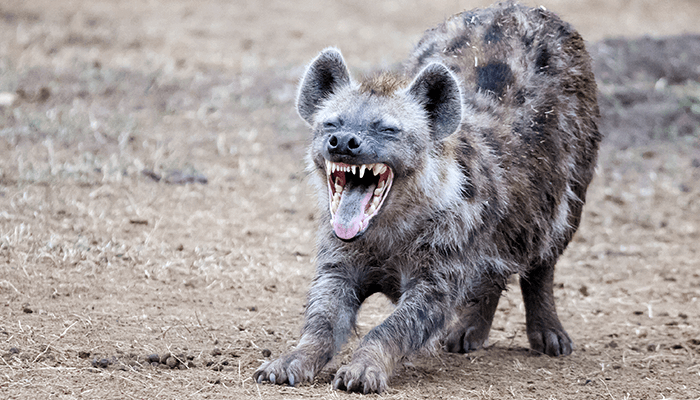 Hyena’s bone-crushing teeth include menacing short canines in the front and massive carnassial teeth in the back, working together to pulverize entire skeletons. The cubs are born with teeth already pierced through their gums, eager to bite!