February, as you know, is the month of love, but the third Sunday in February is also World Whale Day and ­– and as we adore whales, we’re spreading the love to include these magnificent, majestic and mysterious creatures. We’re here to celebrate these magical and highly evolved creatures, and we’ll show just how important whales are to all life on the planet, including ourselves. So sit back, relax and be entertained by a whole bunch of wonderful whale facts (and some fiction too). We’ll get the nasty bits over first and then move onto happier subjects.

Humans vs. whales ­– a sad history 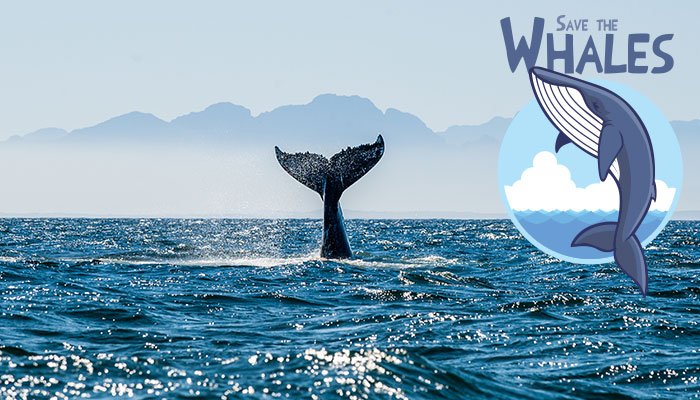 Nowadays, whales are mostly a protected and revered species, with the exception of a few countries who still hunt and kill them for meat, and in the case of Japan, for so-called ‘research’ purposes. But whales were once considered a resource for humans to fully exploit, for their meat, skin, baleen and – most importantly ­– their blubber, which was boiled down for use as lamp oil and to grease machinery. Although whale hunting dates back thousands of years, it grew rapidly from the 18th century, ramping up around the start of the Industrial Revolution, and lasted well into the 20th century, up until 1980 in some parts of the world.

It is estimated up to 3 million whales were hunted in the 20th century alone, the biggest mass killing of a wild mammal species in human history. This industrial-scale killing, using engine-powered ships and powerfully charged harpoons shot from cannon-like guns, literally brought many species of whale to the brink of extinction, with some still on the highly endangered list.

Whales play the starring role in our planet’s survival 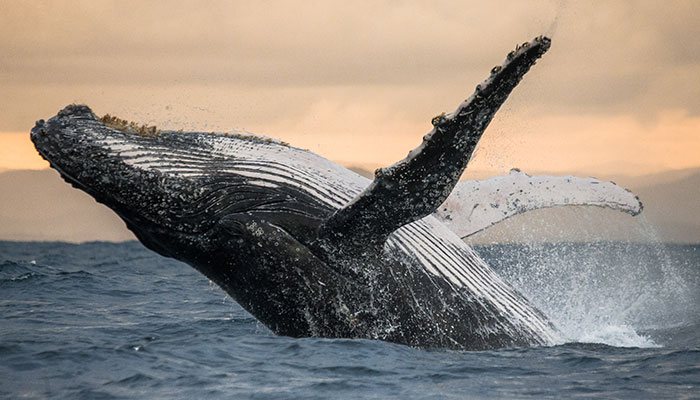 What our ancestors didn’t realise is just how important whales are to us ­– alive and thriving in large numbers. It is not yet widely recognised that whales are indispensable in slowing down the looming manmade climate catastrophe, and why reviving their numbers is key to slowing down the damage and even repairing the marine ecosystem.

Whales enable the oceans to sequester (store and not release into the atmosphere) an eye-popping two billion metric tons of carbon dioxide per year! This is due to their symbiotic relationship with phytoplankton ­– the small organisms that form the base of the marine food chains. This is how they do it: it is the pumping piston-like movements of whales as they dive into the depths to feed and then come up for air. This pump action also drives their faeces to the surface in huge clouds, feeding the flourishing surface phytoplankton that produce oxygen through photosythesis while sequestering carbon, just like trees do. Except that as the oceans cover over 70% of the Earth’s surface, they are truly the lungs of the planet.

Even after they die, whales still work for the common good­. As their carcasses sink to the bottom of the ocean, each year they take with them an estimated 190 000 tons of carbon locked in their bodies.

Whales are truly remarkable creatures and not only should these intelligent giants of the sea be respected and revered, but also appreciated for the fact that our very existence is inextricably linked to their wellbeing. Saving the whales is saving ourselves and future generations.

Whales ­vs. dolphins – what’s the difference? 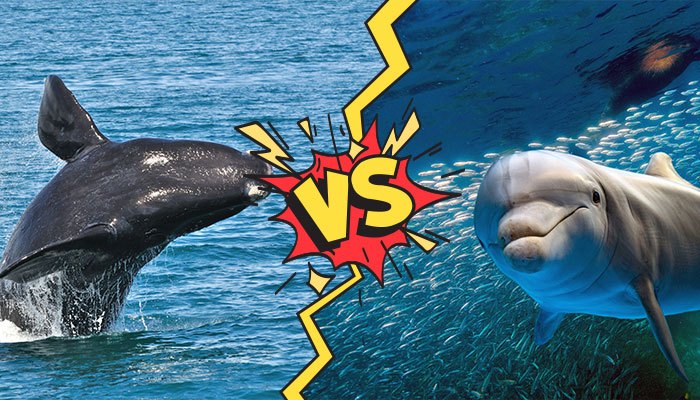 There are two suborders of whales: those with teeth and those with baleen –complex plate structures in the mouth that filter ingested water and catch small sea creatures like krill, plankton and tiny crustaceans. All dolphins and porpoises have teeth, as well as some whales (65 species in all), and about 14 whale species have baleen plates. This obviously has to do with what they feed on. Toothed species feed on larger fish, squid and octopus, while baleen whales feed on much smaller organisms. Baleen whales have two blowholes, while their toothed counterparts have only one. So the difference between dolphins and whales, at least those with teeth, is really just a matter of size.

All cetaceans have lungs and therefore need to come to the surface to breathe air, although they can stay submerged for long periods of time. The mammoth blue whale can hold its breath underwater for up to 90 minutes!

Some of the whales visiting our coastal waters or much further out to sea are migratory, coming up from Antarctica and often moving even further north to calve in the tropical waters off Mozambique and Madagascar before returning south to the icy waters of their home territory. Let’s take a more detailed look at some of our visitors as well as semi-permanent residents…

Southern right whales migrate to the southern African coast fto mate and calve. Their name comes from the days of whale hunting, being the ‘right’ whales to kill because they came in close to shore and tended to float when dead. The hunting of right whales led to their near extinction, but laws passed in 1937 to protect them has seen a significant increase in their numbers. This species can grow up to a length of 15m and weigh the same as ten African elephants.

Migration takes place between June and October, and family groups of these whales can be seen close to shore along the coast. Hermanus in the Western Cape is the premier tourist hub for whale watching. Surprisingly acrobatic for their size and weight, the whales can often be seen ‘lobtailing’ (slapping their flippers and tail against the water) and breaching. Southern Rights tend to move in medium to large groups, making whale-watching an amazing experience. One sighting off Plettenberg Bay consisted of 200 individuals grouped together.

Humpback whales have distinctively long pectoral fins, up to one third of their total body length. Because of this they are in a unique class known as Megaptera, meaning ‘large wing’.  This species can grow up to 18m in length.

While we have the opportunity to see these whales off our coastlines for a few months, they are generally migrating from the Arctic, making their way north to calve and mate in tropical waters off Mozambique and Madagascar. During this time they don’t feed, as their diet consists almost exclusively of krill (small crustaceans) found in the polar regions.

Humpback whales can breach spectacularly, launching their entire bodies out of the water. They are also the most vocal of all whales, the males singing complex songs lasting up to 20 minutes. These ‘songs’ are learnt and passed on between specific groups.

The sperm whale is a toothed whale and is easily identifiable – its shape is the most often used in cartoons and toys. They have a large square head that takes up almost one-third of their body length. The extremely large head houses the spermaceti organ which is filled with up to 2.5 tonnes of thick oil, thought to play a role in amplifying vocalizations and regulating buoyancy, among other functions. Unfortunately, this oil was highly prized by whaling companies and sperm whales were aggressively hunted for this commodity.

You won’t find sperm whales along the coast as they stick to deeper waters. They are experts at deep diving, and have been recorded descending to 3000m, staying submerged for up to 1.5 hours.

As mentioned above, the killer whale is actually a dolphin, but because of its size it has more in common with whales. Orcas can grow up to 9m long and weigh up to 80,000 kg. The Orca’s distinctive black and white markings differentiate it from all other whales and dolphins, which are tones of black, grey or brown. Its markings are actually a form of camouflage known as ‘disruptive coloration’, in which the color pattern of an animal disguises the animal's actual body shape. Also being black on top, an orca is difficult to distinguish if it is below its prey, while it’s white underbelly makes it hard to see if it is above its prey.

Another distinguishing feature is an orca’s large dorsal fins, up to 2m in height. They are definitely apex predators, hunting in packs and preying on other dolphins, seals, seabirds, sharks and even other whales.

Orcas are occasionally sighted off our coastlines and certain groups tend to return to specific locations. For example, in False Bay, Cape Town, groups of orcas are regularly spotted and a rather notorious pair, nicknamed Port and Starboard, is a familiar sight. The mysterious disappearance of many great white sharks off the Cape coast has been linked to these otherwise super predators possibly becoming the prey of killer whales.

No discussion of whales can leave out the planet’s biggest animal and also the largest animal ever to have lived throughout Earth’s history. Adult blue whales can grow to a length of almost 30m and weigh up to 100,000 kg! Just imagine how much food this huge body has to ingest to grow and thrive. And the blue whale feeds on tiny organisms that it filters through its baleen plates. To help it gather up as much food as possible with every gulp, its throat has over 40 grooves which allows the mouth to hugely expand for feeding and the top jaw has over 300 baleen plates on each side to filter food. A calf is about 7m length when born and can weigh between 2 and 3 tonnes, taking in 400 litres of milk each day from its mother’s single nipple, which in a blue whale is up to 1,5m long!

Over the last century, the global population of blue whales was reduced from about 240 000 to an estimated low of 360 individuals due to mercilessly hunting them. While their numbers have increased somewhat, Antarctic blue whales are still critically endangered. Sightings are very rare off the southern African coast, with less than 10 sightings recorded of these leviathans of the deep since whaling was stopped in Namibia in 1975.

Whales are truly remarkable, and we need to protect them for the health of the planet and for future generations. Humans have to stop polluting the oceans with trash, particularly plastics and discarded fishing nets and ropes, which have caused many whale deaths. Lets show these wonderful whales some big love by caring for our oceans.