Mothers in the Animal Kingdom

In celebration of Women’s Day on 9 August, we are sharing some fun facts about the ‘Female of the Species’ ­– the wild, wonderful and (sometimes) weird habits of our wildlife with whom we share our beautiful country at the foot of Africa. We hope you enjoy our little stories as much as we have putting them together for your entertainment.

Elephants – the ultimate matriarchs of the animal world

Elephants are known for their superior intelligence and their highly structured social order, in which males and females live entirely different and separate lives. Males have to fend for themselves once they are old enough to leave the herd, and travel alone or hang out in ‘bachelor pods’. 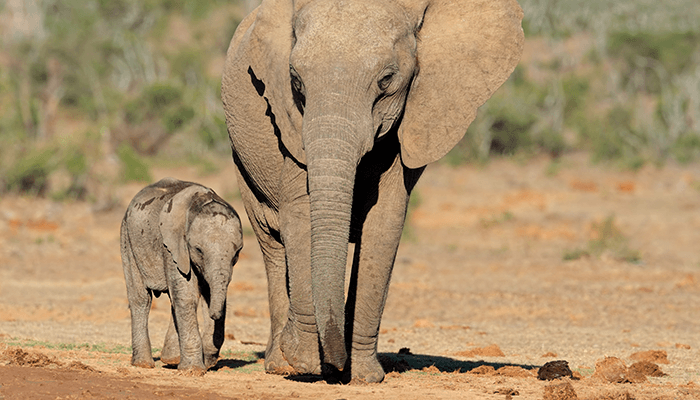 Each matriarchal herd is made up of mothers, daughters, sisters and aunts, and is guided by the oldest and largest female in the herd. The herd sticks closely together, protecting each other, celebrating the birth of a calf or mourning the death of a member.

Same-sex bonding is common in elephants. With females, this is the human equivalent of kissing, hugging and hand-holding – affectionate trunk-entwining and placing trunks into the other animal's mouth. Males will actually mount one another – yes, this happens often in the animal kingdom!

Because of their social structures and norms, elephants form close bonds with those within their immediate herd and family, with females benefitting particularly from this security. This allows an enormous degree of trust and sanctuary within the herd – one big highly-evolved happy family!

The fiercest mom on earth is also the gentlest!

The African crocodile is undisputedly one of the fiercest predators ever to roam the planet. They have been on top of the food chain for more than 3 million years and once upon a time hunted dinosaurs! But the ‘mothering instinct’ is just as strong as their predatory behaviour. 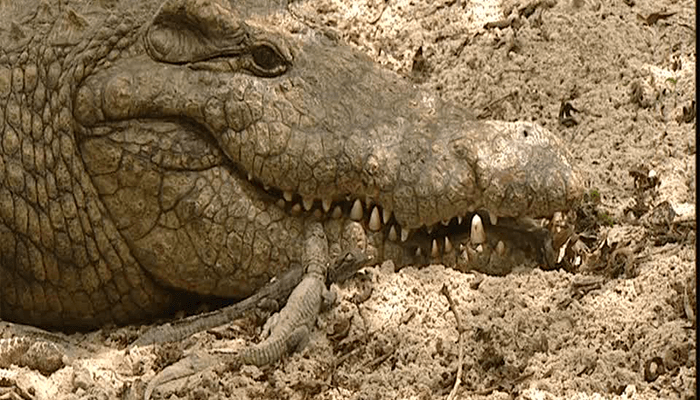 After aggressively challenging rival males and fighting fiercely for mating rights, the ‘lucky’ female recipient of the mating challenge lays up to 60 eggs over 1-2 months and covers the nest with sand. Did you know that the temperature inside the nest has a major effect on the sex of the hatchlings? After approximately 90 days of incubation, all the hatchlings emerge at once, either all male or all female.

As fearsome as adult crocodiles are, the tiny hatchlings are vulnerable to predators, so Mama Croc quickly gathers all the hatchlings in her mouth and takes them into the water. The deadly jaws that can tear anything apart become the safest place for crocodile babies. She gently carries her babies in her mouth wherever she goes, and locks her jaws leaving a 5 cm gap between them so that the hatchlings don’t get bitten accidentally.

Like most big cats, leopards are solitary. They each have their own territory, and leave scratches on trees, urine scent marks and poop to warn other leopards to stay away! Males and females will cross each other’s territories, but only to mate. 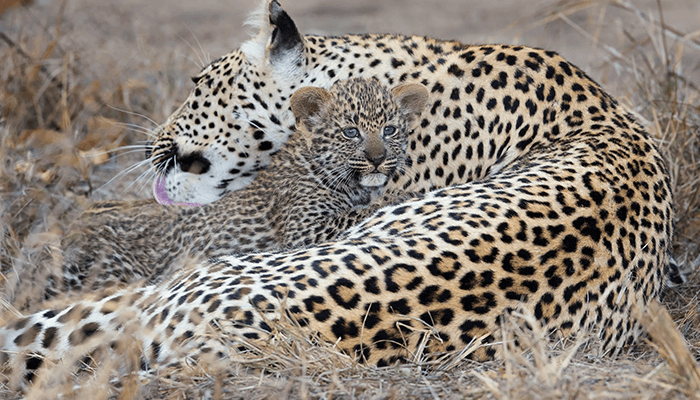 Female leopards give birth any time of the year – when they do, they usually give birth to two or three cubs, who stay with their mother until they are about two years old, when they are old enough to hunt and take care of themselves.

While leopards are top predators because of their strength and stealth, preying mostly on mammals such as impala, gemsbok, kudus and warthogs, females with cubs have been found to have a different diet of a wide range of much smaller prey. This is because they will not roam far from their cubs to find food, so stick to what’s available in their vicinity. Their cubs’ safety comes first!

African penguins are monogamous and pair for life. But no slacking for the dad! When the female lays her clutch of two eggs, both parents take turns incubating their future offspring over 40 days, with one going off to sea to catch fish while the other keeps the home fires burning (well, sitting on the eggs, anyway). 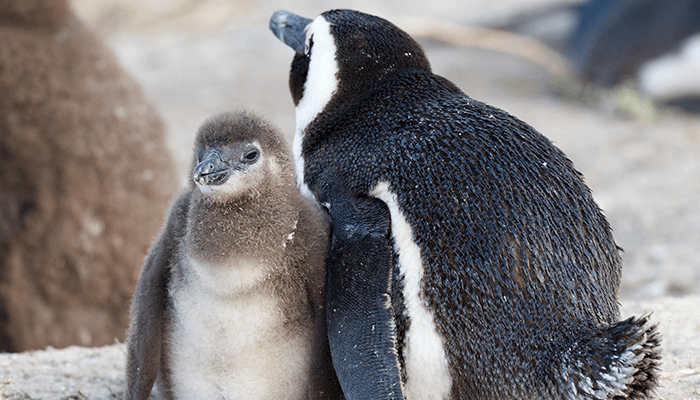 When the chicks hatch, at least one parent guards the chicks for about a month, whereafter the chicks are sent off to join a crèche with other chicks, and both parents head out to sea to forage each day.

In the penguin world equal co-parenting is the order of the day!

Fun fact: Penguin’s black and white ‘tuxedo’ outfits are not just cool fashion – they are for camouflage in the water. Their ‘countershading’ of black on top hides them from predators swimming above, and their white bellies make it difficult for predators to spot them from below.

Meerkat societies are supported by exceptionally strong hierarchies. ‘Gangs’ or ‘mobs’ consisting of anywhere from five to 30 meerkats are ruled by a dominant male and female. Everyone beneath this king and queen is something of a commoner, with the dominant meerkats running the show. 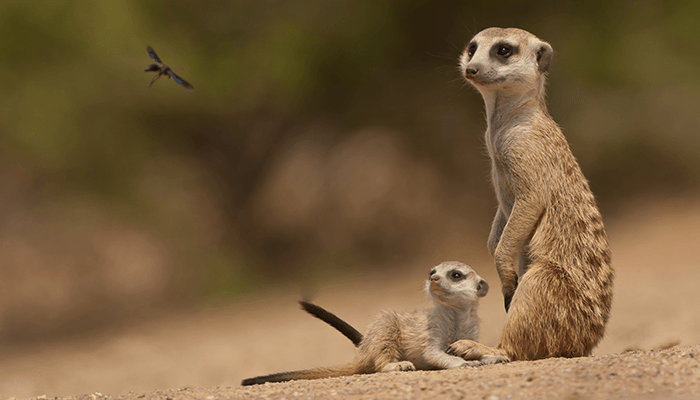 The position of dominant female in a meerkat mob is a pretty important one. Research into meerkats has found that they cooperatively breed. This means that the vast majority of pups are produced by just one female – the dominant female. She can be responsible for up to 80 percent of the pups produced in a gang each year. The subservient females must then act as mere nursemaids.

A female meerkat can become the dominant lady in her gang by seizing the title after the former dominant female has died or moved away. Or she can climb the meerkat hierarchy by simply leaving the mob to form her own elsewhere. But she’ll have to very charismatic to gather a supportive group of subservient females to begin a gang.

Lions are the only big cats that live in groups, called prides. Pride leadership often shifts between several individual animals, male and female, but the social structure of the pride hinges around the bond between related lionesses, who collaborate in all tasks, from raising cubs to hunting. Male lions come and go – often in spectacular battles over territory or individual dominance – but the pride cohesion remains unaffected, firmly under female control. 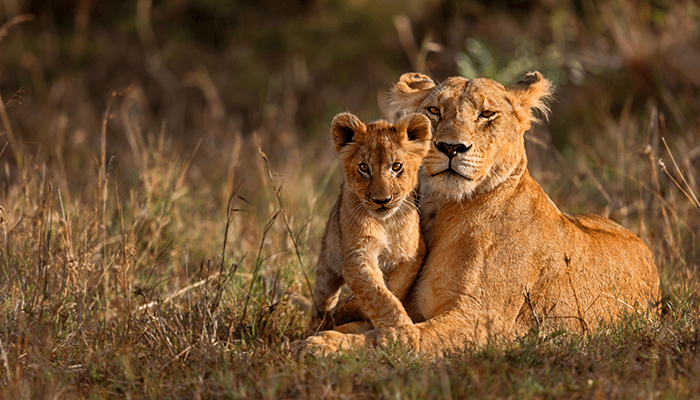 Lionesses hunt together as a team, bringing down large prey like wildebeest and zebra. But it isn’t true that only females ‘bring home the bacon’ – males do hunt occasionally, when their strength is needed for taking down large prey like buffalo. However, males are mainly required to protect the pride while the lionesses are out on the hunt. But whoever hunts, it’s the males who (unfairly?) get first dibs, followed by lionesses, and lastly the cubs. When all the lions have had ‘the lion’s share’, spectacular fights may occur among scavengers for the last scraps of food.

A male southern masked-weaver’s work is never done, it seems. He will painstakingly work from dawn to dusk building up to 25 complexly woven nests in a season. (Being a polygamous bird, he does want to ‘bed’ quite a few females, so he really has his work cut out.) 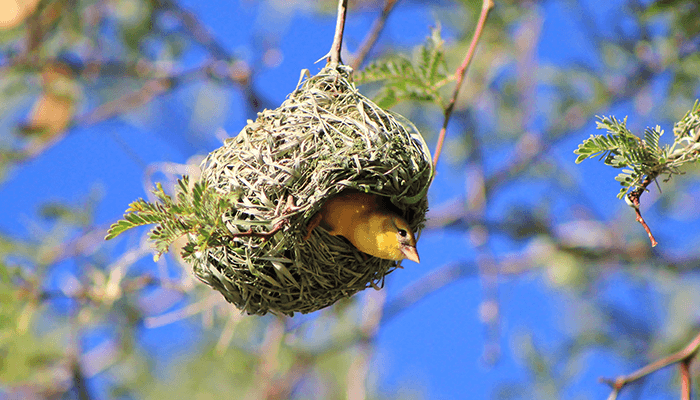 Once he has completed a nest, he entices a nearby female to approve his home-building skills. She often rejects his offer, and the poor guy will tear it down and start all over again. When a female finally accepts his ‘love nest’, they will mate and she moves in to do the interior decorating, then lays her eggs.

But beware the Diederick cuckoo, who will come and lay eggs in weavers’ nests! The female weaver, however, has evolved to thwart the evil cuckoo’s plans – she lays eggs of varying colours and the cuckoo does not know the colour of the eggs in the nest until it invades the weaver nest. The female masked-weaver will then promptly eject any eggs that are a different colour to her own. Clever birdie!

The African Porcupine is a type of rodent that has long sharp spines, up to 50 cm long, which cover its whole back and can be raised by muscles under the skin. The white and black crest of spines and quills can be erected at will to make the animal look enormous and threatening. Some spines on the tail are hollow and make a rattling sound when shaken, scaring off would-be predators.

So the prickly question is: how do porcupines mate? Very carefully might be the answer, but more correctly it would be that only females who are receptive will allow it. Because of their dangerous anatomy, females initiate copulation by ‘presenting’ to the males. Otherwise it’s definitely a no-go! 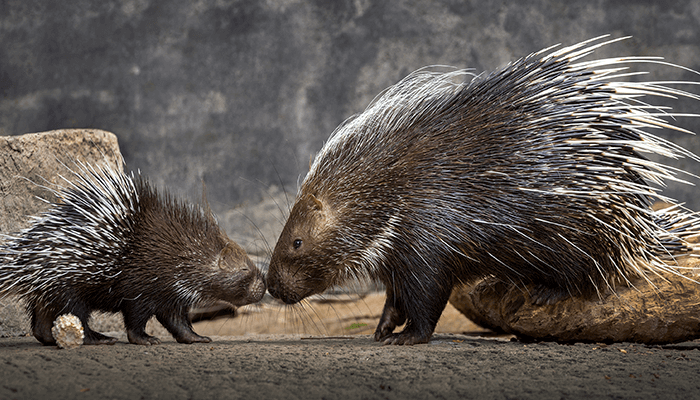 Baby porcupines are born fully-developed, with teeth and their eyes open, but luckily for their moms their quills and spines are soft, which quickly harden in the air.

Fun fact: Although porcupines are mostly vegetarian, if their diets are deficient in phosphorous, they gnaw on bones, sometimes collecting large piles of bones in their dens.

Giraffes are truly unique with their long legs and necks and can grow to a height of over 5m. Remarkably, giraffes still only have seven vertebrae in their necks – the exact same number of bones as a human neck! 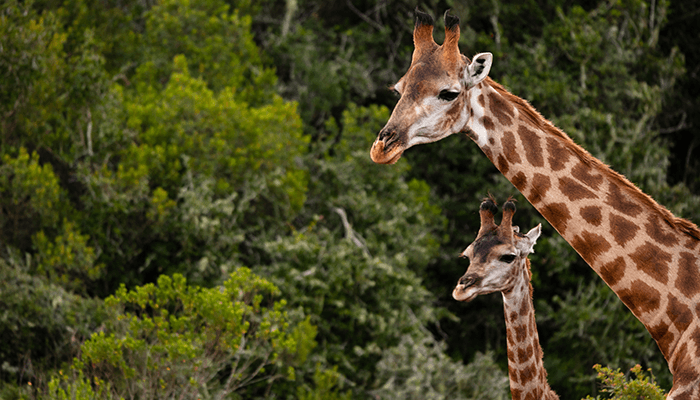 You can tell if a giraffe is male or female by looking at the horns. Both male and female giraffes have horns, but the tops of the horns on a male are almost always bald. A female giraffe’s horns will be completely covered with hair. This is because males establish dominance by fighting with other males, which is called necking, and the hair on top of the horns often gets torn off. Females don’t fight, so they never lose the hair on their horns. (Guys, be warned!)

Interesting fact: a giraffe’s horns are not actually horns at all! They are ossicones, which are horn-like protrusions. They’re formed from hardened cartilage that is covered with skin.

Rhino love is a slow affair

A group of rhinos is appropriately called a ‘crash’.  These wildlife heavyweights are surprisingly agile and can run up to 40 kmh, so beware! As fast as they can be, however, the mating ritual is a drawn-out business, requiring patience and perfect timing. 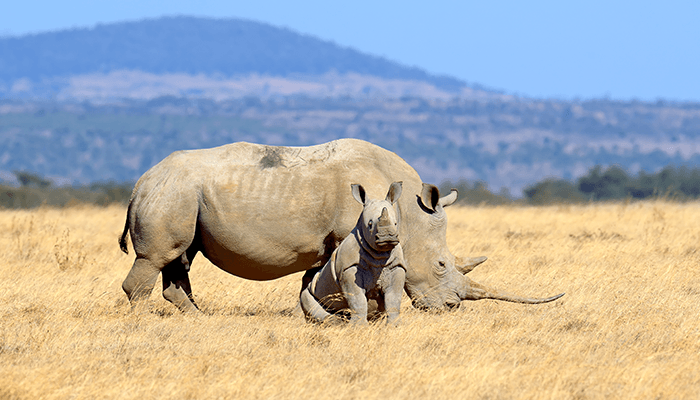 Rhinos’ territories are marked with dung heaps at their boundaries. As they have poor eyesight, but a very keen sense of smell, these markers are like a rhino library, telling them who and what is where.  When a rhino bull is seeking a mate, he uses his sense of smell, he can tell by sniffing a cow’s urine when she is ‘available’. Then follows the getting-to-know-you period, the suitor hanging around his potential ‘date’ for about 20 days.

Only when she’s good and ready, Ms Rhino allows him to approach. The courtship lasts up to a day, characterised by the male resting his chin on her rump and attempted mounting. Finally, she will stand still, with tail curled, and allow copulation. Mating is remarkably prolonged, lasting from 20 minutes to one hour!