Last year 2015 was a very successful year for Springbok Casino. Thousands of South Africans had the privilege to win big money at their favourite South African online casino that has set many standards for other casinos that focus on providing legitimate online gaming services to this nation. With the accolade given by Zebracasino.co.za for being the Best Online Casino for 2015, Springbok Casino will go down in recent history as the finest online gaming establishment in South Africa.

There were many lekker moments that made players happy at Springbok Casino in 2015. Most notable player was the Jonathan D. of Witbank who managed to convert his 40 Rand deposit into a massive 40,000 Rand win.

The premium world-class internet casino gaming software by Real Time Gaming was enriched with new game releases. Now the flavour for games is even tastier than before. In order for 2016 to start with the same vigour as 2015, a new progressive game was introduced in January, God of Wealth. 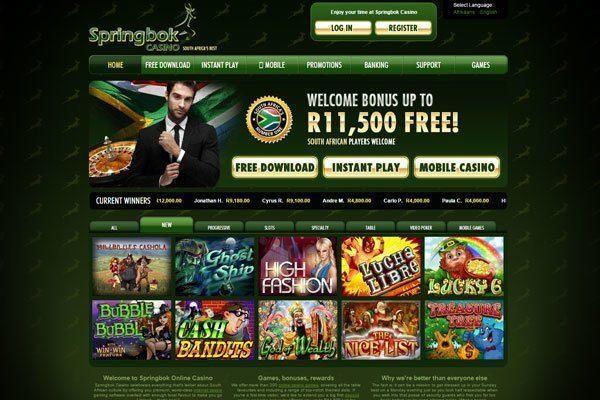 Prior to that, in 2015 Springbok Casino introduced new games such as Lucky 6, The Nice List, which was added to spice up the Christmas mood, Bubble Bubble Halloween, Mermaid Queen and High Fashion for the mobile casino, Lucha Libre, The Three Stooges, Double Ya Luck, European Roulette etc. In total 12 new desktop and 20 new mobile games were added to Springbok’s rich list.

It’s not only because of the games that Springbok Casino has been voted the best online casino for 2015. It’s the new types of bonuses too. In 2015 Springbok Casino added 25% cashback on each and every deposit. There were also many Game of the Month bonuses, holiday bonuses such as the Human Rights Day and World Ranger Day bonuses. Many freebies and freerolls were given too most notably the 25,000 Rand freeroll slots tournament. This year the freeroll slots tournament was increased to the biggest ever share prize of 99,999 Rand.

Thanks to the cutting-edge mobile experience and increasing diversity Springbok Casino grew 34% in 2015, a growth that can also be attributed to the thousands of new signed up players that are now part of the big Springbok family. Due to this the casino was able to expand itself in terms of additional new staff in the fields of social media management, customer support and brand management all for one simple aim to enhance the user experience at the casino.

2016 will be a very exciting year to be part of Springbok Casino. New, innovative and exciting promotions are on the way and more games are expected to be added. There is no doubt that Springbok Casino will offer an even bigger quality.