Realtime Gaming relentlessly keeps delivering new games and we're more than happy to give each of them home at Springbok Casino. Having played with cute Purrfect Pets, crafty Cash Bandits 2 and generous Kung Fu Rooster, you're now in for a magical surprise. Gemtopia Slot will send you digging for precious stones in an enchanted underground location where, with the help of several special features, you'll be given a chance to unearth the treasure worth 50,000x your bet.

A mystical underground cave shows no sign of life, except for a small river running from its depths out into a calm night, moving into unknown under the dark sky sprinkled with stars. Those courageous enough to enter this solitary place are given a chance to spin 5 reels and collect valuable gems paying over 15 flexible paylines. You might be the only breathing thing in there, but it doesn't mean you're on your own. Little helpers appear in the form of Wild, Scatter and Bonus symbols to help you land winning combos and play for free.

Sparkling Wild gem contributes in more ways than one. It will appear on reels 2, 3 and 4 and stand in for any of the regular symbols, expand to cover the entire reel before cashing out, and award a re-spin. While you get another go for free, triggering Wilds will hold their positions. Should an additional expanded Wild land at this point, another re-spin will take place.

Free Games icons frequent the same reels and trigger 15 Free Spins with the addition of a new symbol. Get 3 Bonus gems to appear while the feature lasts and you'll be given 3 extra free games along with instant prizes; touching each Bonus symbol reveals a reward of up to 1,000x your total stake!

Being a Springbok fan you'll know that this developer generously packs their games with special extras, and this one is no exception. On top of the features mentioned above, it also provides two progressive jackpots which are triggered randomly. Should they be won, Minor jackpot will reset to $250 while Major jackpot drops to $1,000. 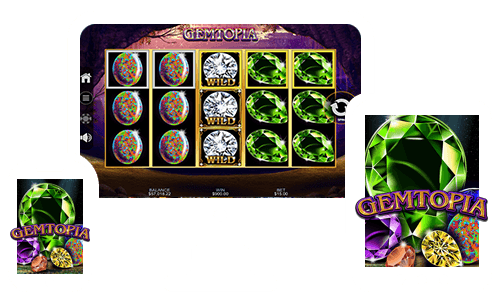 Your favourite South African Casino never rests; we make sure that you not only get to play the most popular games out there, but are also able to try out the new ones as soon as they get released. Gemtopia will become part of our portfolio as of 16th August and you're cordially invited to pay us a visit and give it a go. While you'll be collecting colourful little gems and potentially earning as much as 50,000x your line bet, we'll be making preparations for the next addition to our gaming catalogue. Stay tuned as Dragon Orb, another magical RTG game, makes its way to Springbok.

Gemtopia will be available on August 16th for our download casino, instant play casino and mobile casino.