Is there anyone out there not familiar with Jackie Chan, martial artist, singer and actor known for performing all his stunts himself? Realtime Gaming has decided to pay tribute to this multitalented individual by developing a video slot based on a 1983 Hong Kong action-comedy in which he starred in a supporting role. Quick update for those who missed the movie: During World War II, a group of allied generals is taken hostage by the Japanese, and a group of misfits, sent in a rescue effort, accidentally get joined by two small-time crooks – Jackie Chen being one of them.

Following numerous scenes of realistic and completely unbelievable fight scenes, it’s no surprise to find Jackie standing while all others get killed, and in his usual style dismissing the generals with a line: "I don't know any Generals. To me you look like clowns!" While we’re eagerly waiting to see RTG’s take on this famous martial artist / comedian, let us share a few details about the new game.

Fantasy Mission Force is a video slot with 5 reels and 20 variable paylines, meaning you can play with less if you choose to. While theme-related symbols form winning combos from left to right, Wild icon will provide assistance by standing in for every single one except Scatter. The substitute appears on all reels but the first, and doubles the prize whenever it’s part of a paying combination.

In order to launch Dynamite Free Games, players will need to land Scatter on reel 1 and Wild on reel 5. Subsequently, they’ll be offered 7 free spins to start with, and have all resulting payouts tripled. At the same time a Bickford Fuse will be added to random symbols, and simultaneous appearance of 3 or more trigger the  Kaboom! Feature. Each fuse awards 3 additional free games, the best part being one can keep kabooming and playing free-of-charge infinitely. With a bit of luck, players can claim the top prize of 50,000x bet per line.

What about the progressive, you ask? Don’t worry, it hasn’t been left out. Fantasy Mission Force is the first of many action-packed games which will be linked to same jackpot. Each time it’s won, jackpot value will reset to $5,000. 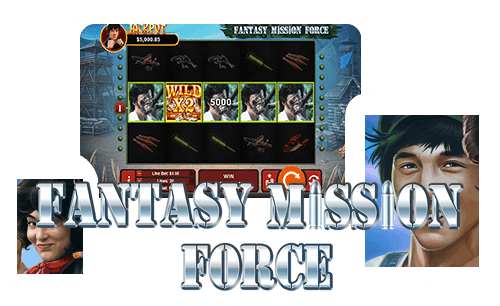 Take Jackie Out to Town

If you’re eager to join the action and help Jackie Chen defeat villains in a game based on 1980’s cult classic, pay Springbok a visit on 31st January 2018. PC owners will be able to launch the game either in their browsers or via downloaded software, and all players with an iOS or Android mobile device get a chance to play with Jackie wherever and whenever they feel like it.