Roulette is an easy game to master. Basically, the ball spins around the wheel until it nestles into a winning slot. A French or European wheel has 36 red and black numbers and a 0, which is usually green. An American wheel (which is the most common) has 00 added to the arrangement. Because many bets lose on 0 and 00, these additions give Roulette its house edge. Players place their bets on the table until the dealer (or, as they’re officially known at the Roulette table, the croupier) calls “No more bets.” 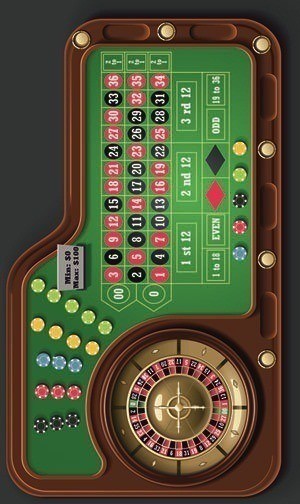 Above: The Standard Roulette Table

There are two types of bets you can make: inside bets and outside bets. ‘Inside’ bets are placed on or around the grid of numbers on the table, and these wager on a single number or group of connected numbers. For example, you can bet on 1 alone, which will give you a 1/36 (or 1/37 for American Roulette) chance of winning. You can also bet the split by placing your chips on the line between the 1 and the 2, which has 17:1 odds. You could also bet on the street: that is, a row of three numbers (such as 1, 2, 3) by placing your chips below your chosen row, on the line that straddles the inside and the outside.

‘Outside’ bets are placed in the blocks flanking the inside, and wager on a selection of numbers. Black or red, odd or even, 1 to 18 or 19 to 36 are all outside bets. These bets all pay 1:1 because there’s an almost-even chance of winning (but remember the house edge made by the 0 and 00 make these odds less than true.)

Of course, when the ball lands on 0 or 00 all outside bets lose because the naughts are neither red nor black, odd nor even and aren’t included in any combination of the outside bets.

Not so tough after all hey? Now that you know how Roulette works, go out and enjoy the thrill of the spin. Download Springbok Casino now! Springbok mobile casino is also available for Android and IOS mobile devices. Online gaming, made available at your fingertips!