Play to the Sound of Ritchie Valens’ La Bamba

Inspired by a big hit from the late 1960s, Realtime Gaming produced an energetic all-ways-pay video slot featuring a famous American rock & roll singer and guitarist. La Bamba was created as an adaptation of a Mexican folk songs and was also one of Ritchie Valens’ biggest hits. “To dance the Bamba, one needs a bit of grace”, says Ritchie, but a bit of luck is all it will take to collect hefty wins with this delightful retro-themed title. You’ll certainly get a lot of help from the game’s special features, among which expanding Wilds and free games with multipliers. Enjoy spinning to the catchy sounds of Ritchie Valens’ La Bamba and you might get rewarded with the top prize of 6,000x bet per way.

Richie Valens’ La Bamba offers a lovely trip down the memory lane. It will take you to 1950s American diner and populate 6 reels with vintage gramophones, shoes and guitars, tickets to Ritchie’s concerts and his record covers. While you’re enjoying some of his most popular songs, winning combinations will be formed by matching symbols landing on adjacent reels from left to right and the other way around. Wild Ritchie Valens shows up on all reels but the first and the last, and subs for all other symbols - including Scatters! Each time he makes an appearance, Ritchie will stretch over the entire reel and hopefully increase the frequency and size of payouts. He’ll also double the prize whenever his icon contributes to the winning combo.

Land at least 4 Scattered La Bamba Records and you’ll trigger Ritchie Valens free games. While spinning on the house is guaranteed, other extras might be delivered depending on the number of triggering symbols. Four Scatters activate up to 20 free games with prizes multiplied by 1, 2 or 3. Five Scatters will do all that but also stick additional expanding Wild icons to reels 2, 3, 4 and 5. Should you manage to activate the bonus round with 6 Scatter symbols, Ritchie Valens will also start appearing on reels 1 and 6. Can you imagine the kind of fortunes one could collect with the expanding substitute fully covering multiple reels? What’s more, the feature can be retriggered to add another batch of 20 free games with additional treats.

Realtime Gaming scores once again! Their new game comes with a unique and fun theme, superb graphics, fantastic soundtrack and lucrative features. Ritchie Valens La Bamba will be released on 14th March and become simultaneously available for download, instant play, and on the go. If you’d like to take Ritchie out, let us remind you that Springbok Mobile Casino can be accessed online via iOS, Android, Blackberry and Windows devices. Android users can now also take advantage of our new Mobile Casino App. And while your fingers and feet move to the sound of La Bamba, RTG will be finalising their next title. Stay tuned and we’ll let you know what to expect from the sequel of popular Lucha Libre slot. 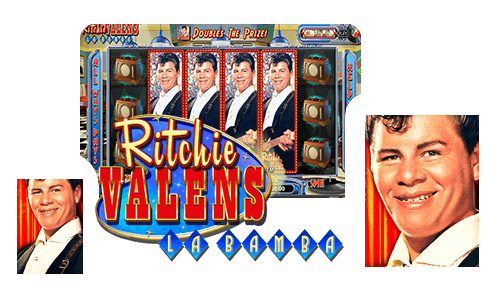